I was scanning the pages of a scientific journal one evening and fell upon a guest editorial that made me fall out of my chair. Two scientists from a respectable institution suggested, with all apparent sincerity, that the best way to avoid the extinction of humanity would be to colonize outer space.

This immediately brought to my mind the image of the interstellar community frantically deploying some kind of cosmic germ killer to deal with the infectious blob spinning off from our mortally wounded biosphere.  What have we done here to deserve welcome anywhere out there?  Our record of stewardship is not good.  We have not been kind to any life forms that have had the misfortune to be present when we have colonized new territory- not even members of our own species.  Those of us left behind could only hope that any life forms out there would not have a view of epidemiology that included going after the source of the incipient infection. 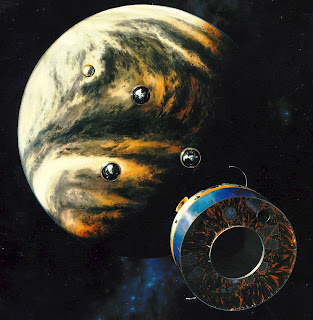 Humor aside, there are some very troubling aspects to this argument.  I was surprised and disappointed that such a view could be espoused in an ecological journal.  Ecologists, of all people, should appreciate the intricate, invisible bonds that tie us to the biosphere of this planet.  The history of the evolution of this biosphere is inseparably bound within us, from the micro nutrients we need, our bodies' metabolism, and the bacteria that live in our digestive systems to our circadian rhythms, set by the sun as we move around it with our planet Earth.  We have proven we can survive, briefly, out of the context of our world, but do we really have the arrogance and hubris to believe we can recreate everything we need somewhere else, when we have only the shallowest understanding of the interrelationships here that sustain us?  Ecologists should know better. 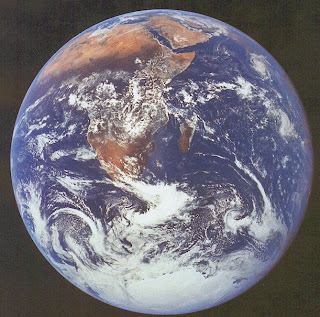 Home Sweet Home
View of Earth from Apollo 17. Image from NASA
There are even more disturbing aspects to this argument.  Who's going to get to go? There are nearly seven billion people here.  Do we really think there can be a morally justifiable process to pick those few?  What traits would we choose?  There is a saying regarding China- if your talents make you one in a million, there are ten thousand people just like you. That would mean seventy thousand just like you throughout the world. Are we willing to deliberately condemn most people to linger on a dying planet while we pour the last of our scarce resources into flinging those few into space?  How could those few live with that decision?  Even worse, what if they could? What would that say about the values and ethics that we chose to propagate beyond our planet's boundaries?
It would take a tremendous investment of resources, including non-renewable ones, in order to succeed.  Even if we decide that we do not care about the moral implications of allowing billions of individuals of our own species, not to mention all the rest of the life forms, to suffer slow death on a ruined planet, why do we think those condemned masses would allow the chosen few to despoil the remaining resources of the planet in order to make their getaway?  And again, the fact that a few might be willing to ruin the futures of so many also says nothing good about the values and attitudes we would be broadcasting into the cosmos.
Unfortunately, this really isn't a hypothetical situation.  There are a chosen few who are already busy destroying the futures of the many, apparently without a single second ethical thought.  Our goal is not to colonize the final frontier, but simply to espouse a lifestyle that happens to extend far beyond our ecological means.  Ironically, it is a lifestyle that frequently leaves us frenetic, sick, and miserable in addition to creating a tremendous delayed cost that our children will have to bear.  The chemistry of our atmosphere, oceans, and even the soils are changing rapidly.  They are not changing in ways that will enhance our survival.  It is sad indeed that ecologists are not at the forefront of sounding the warning, and leading the way in reinventing our society so that we are not committing an act of genocide whose victims will include all of us and our children. 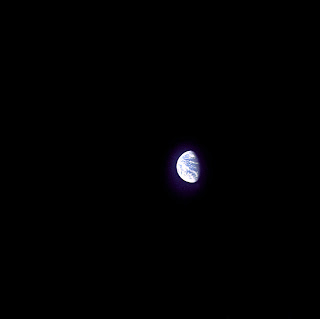 View of Earth from the moon. Image from NASA.﻿
I can imagine that little space capsule spinning out of the Earth's orbit, carrying the seed of incipient disaster to new worlds blissfully ignorant of the fate that awaits them. Out the little window, a message forms in the clouds over the small planet they leave behind:
Do not enter. Toxic dead zone.
Surely we can do better than that.
Posted by Jennifer Gervais at 8:13 AM