I bought a small tape recorder recently, and decided to record the chorus of Pacific tree frogs in a nearby wetland next to our road.  I chose a nice warm rainy night and the frogs obligingly sang their hearts out, for love, for mates, for genetic fitness, maybe just for the sheer joy of it.  Whatever the reason, they filled the darkness with their urgent sound.

I couldn't record for more than a minute or so before the performance was interrupted by the sounds of tires on wet pavement, leaving a lower-intensity backwash of sound in the vehicle's wake.  The frogs kept singing through most of the interruptions, which was a good thing or they would have lost much of their stage time even on this relatively quiet dead-end road.  It got me thinking of how all the racket we make affects other organisms. 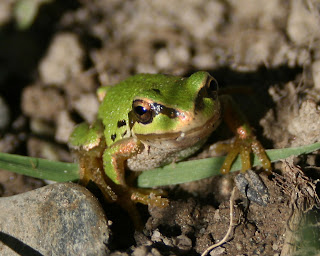 We are a visual species, despite using sound extensively for intraspecific communication.  If you sat down and described your favorite place, would you include sounds at all?  Even when we talk about concepts, we use visual imagery: as you can see from the big picture, if we took the long view, we could see the problem through to its logical conclusion.  We don't even have the language for a soundscape.  Do we call it the big audio?  The whole noise?

Bryan Pijanowski and four colleagues explore the ecology of soundscapes in a review article recently published in the journal Bioscience. The basic working idea is captured by the Sender-Propagation-Receiver model, where the sender's biophysical characteristics and intent shape the form of the message.  The message may be further modulated by its passage through the physical environment, and its ultimate effect depends on the perception and interpretation of the recipient.  The male frogs' individual success not only depends on the quality of the competition, but also the ability of their calls to carry successfully to the ears of female frogs who will undersand the message- and respond as the males desperately hope they will. 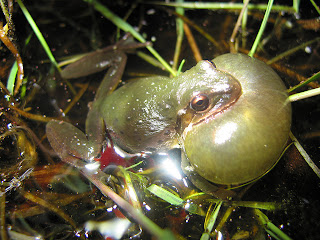 You can also break sounds down into three general categories.  Geophony describes the sounds of the natural environment that are from physical processes.  Think of the sound of wind hissing across long grass, the sharp pure crack of rockfall, or the extraordinary sound of moving water.  Biophony are noises made by living organisms, although Pijanowski and Company seem to reserve the term for non-human organisms.  Birdsong is obvious; the sounds of a slug munching vegetation, or the whir of a beetle's wings, a little less so.  Finally, the sounds made by Homo sapiens are classed as anthrophony.  It is probably a relevant distinction, because even though we're very much a part of the biological fabric, the vast majority of the noise associated with us is empty of meaning.  Think lawnmower, or air conditioning, or the sounds of vehicles on wet pavement.  That's not to suggest chewing slugs are communicating, but the noise is relevant to slug predators such as ground beetles or garter snakes.

Do we affect the natural world with our racket?  There is a great deal of concern now about ocean noise pollution interfering with the communication and navigation of marine life.  European robins shift the timing of their song in noisy environments.  Song sparrows shifted the lower-frequency notes upwards in their songs, and great tits use higher pitches when confronted with more ambient noise.  In short, the din of civilization has an impact, one we are just starting to recognize and measure. 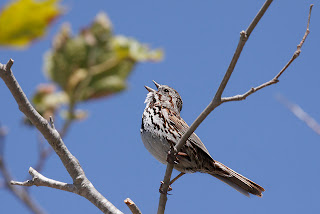 Our cacophony of meaningless noise may have another undesirable effect, this one on us.  We fill our leisure time with the sounds of music or podcasts or television, which have become so portable we can take them right into the very heart of biophonic and geophonic symphonies in progress.  Hearing loss is so obvious and so well publicized it hardly bears mentioning.  But, if we navigate our world by cultivating the skill of blocking out the sounds surrounding us, how well can we listen and actively hear when confronted with an environment that demands it?

Fortunately, very few of us need worry about the signals of natural sound.  We might miss the sudden snap of a branch broken by the deer, the liquid silver of moving water, or the sex calls of frogs, but our lives don't immediately depend on our hearing those signals.  But, by choosing to venture into natural environments without opening ourselves to one of the major dimensions of experience they offer to us, we do perhaphs further alienate ourselves from our biological roots.  Further losing our sense of place on this small planet may not be a matter of just making meaningless noise.
Posted by Jennifer Gervais at 8:40 PM