An Ode to Voles

It's time to plant my peas, but I've been watching a series of holes appear around the foot of my garden's raised beds that suddenly began to appear in Februrary.  It looked like the lawn was undergoing a slow-motion boil, but in each spot where a bubble popped, a vole burst forth leaving a new burrow system behind it.  They've got their own plans for my vegetables, I'm afraid, because at least one new tunnel opened right into the bed itself among some overwintering beets.

Time to set some snap traps in the garden beds, and I've already sheathed our young orchard's tender trunks in hardware cloth.  Even as I take defensive action, though, I have to admit I admire these animals greatly.  An ounce or three of fur and digestive system, taken in the whole, has a tremendous impact on the ecosystem. 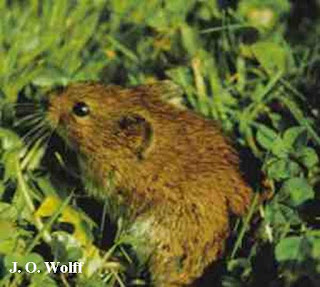 Gray-tailed vole, Microtus canicaudus. Photo by Jerry Wolff
Voles have fascinated ecologists for over a century with their high-latitude cycles of boom and bust; it's been a hundred years and literally thousands of scientific papers and we still don't really understand what drives those catastropic plunges in density that inspired the legend of mass suicide by drowning.  We are, however, making progress.  Regardless of what happens to the majority of them, a few voles survive the cataclysm, and the start of another wave builds from those survivors.

It turns out that the wave analogy is actually a very good one.  A number of organisms, from larch bud moths and pine beetles to voles and lynx, seem to display population dynamics that can be modeled as waves moving across the landscape.  There are a number of recent papers in the scientific literature by Jonathan Sherratt and others that apply the mathematics of periodic travelling waves to the population dynamics of animals.  Leaving the mathematics behind for now, imagine a wave of animals rising up on the landscape, their impact rising with their numbers, then abruptly dropping down as the peak of the wave moves on.  You can actually view a simulation of these waves on Dr. Sherratt's website.

When voles explode, they provide a ready protein source that is exploited by every carnivorous or omnivorous animal able to swallow them.  Some animals, such as the snowy owl and the least weasel, seem to be quite tied to the cycles of their prey; others are blatant opportunists.  I studied burrowing owls for many years.  The year the California vole populations were so dense I could sit on the cab of my truck and actually hear them grazing, the burrowing owls raised up to 11 young per pair.  The result: a wave of young predators spreads from the wave of available food, spreading concentric rings colliding and melding across the landscape. 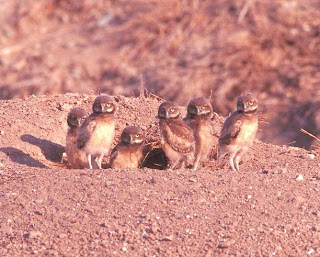 Burrowing owl young. Photo: D. K. Rosenberg
Voles are small, but their numbers during a peak year can be impressive: estimates of voles' maxium densities run from 3,000 to 25,000 per hectare.  That works out to roughly three-quarters of a ton of small herbivore per acre.  Henry Howe and his colleagues put out exclosures in a prairie system and demonstrated that vole herbivory greatly affects the plant community.  What that study didn't consider is the dynamic nature of that herbivory as the populations crest and trough in any particular place.  So, imagine that wave sweeping over the landscape again, perhaps leaving behind distinct age classes in the vegetation.  I'm not sure anyone's looked for that yet.

Voles don't just eat and get eaten; they also dig and poop and pee.  Anyone who has ever looked after 750 pounds of herbivore living in a barn knows how much manure can be produced out the back end by non-ruminants especially, where so much of the bulk is passed undigested.  Voles dig, depending on the species; I've counted ten burrow entrances per square yard after a good outbreak year in western Oregon.  They create a vasculature of sorts, a series of pores and veins into the living soil which they then fertilize for good measure.  We've demonstrated that voles affect nitrogen in the soil profile.  We know the hollows in the soil allow both air and water to penetrate.  In western Oregon, the burrows may last longer than the voles that created them, in some cases up to a year or more before the burrows collapse again.  Even after the burrows have collapsed, the soil profile remains altered with pockets of less-dense soil. 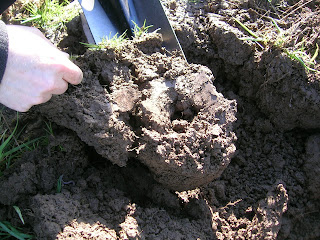 Cross section of vole tunnel in soil sample.  Photo by J. A. Gervais
Imagine that wave again, flowing across a landscape, changing communities of plants and animals, changing the very properties of the soil, the foundation of the terrestrial ecosystem, and then abruptly receding.  Voles' impacts travel in both space and time, and after a century, we have only the most basic grasp of those dynamics and their consequences.

As global climate changes, so apparently are the cycles of the voles, and we have no idea what will happen to the ecosystems they inhabit when the voles no longer exert this incredible, dynamic force on the landscape.  The cycles may be disappearing in Scandanavia.  In other areas, the spikes in numbers may become greater or more frequent, heralding a different sort of change.  I don't know exactly what is driving the numbers of voles in my back yard, but I don't mind if they graze a few beets as long as they leave my peas alone, and they can help themselves to all the grass they can eat.  I'll be watching for young bobcats and barn owls later in the spring as the vole biomass (powered in part by my vegetable garden) works its way through the food web.
Posted by Jennifer Gervais at 1:57 PM