Trillium chloropetalum, the sessile trillium or wake-robin, flowers in mid-March in the woods of western Oregon.  It blooms just before the start of the spring chorus of birdsong.  This plant's mottled leaves are  almost as showy as its greenish-white flowers, which don't open into broad showy blooms like the western trillium. Both species of trillium produce a seed with an eliasome, a fleshy body particularly attractive to ants who disperse the majority of the seeds.  Yellow jackets also disperse trillium seeds.  These plants are pollinated by beetles, bumble bees, moths, and the non-native honeybees.

I didn't find any published research on the sessile trillium, but the western trillium can live to be over seventy years old based on counts of the annual restrictions on its rhizome. It does not even begin to flower until its fifteenth year. Trilliums don't survive disturbances such as logging, and the increased numbers of mice associated with clearcut and edge habitat take a toll on their seeds.  Long-lived, slow-growing plants affected by human disturbance face an uncertain future.

Even so, the sessile trillium persists in some unlikely places.  Along the overlooked urban banks of a local river, a thin strip of trees between the pedestrian path and the water's edge ducks under a series of overpasses.  Scotch broom, English ivy, and Himalaya blackberry tangle old plastic bags, broken bottles, and other refuse in the understory.  Nobody looks to these places for conservation.  But sessile trilliums bloom here every spring, refusing to relinquish this patch of forsaken ground. 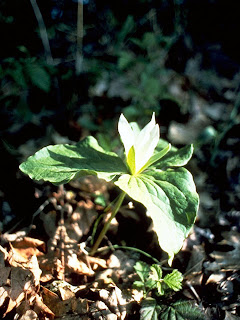 Trillium chloropetalum. Photo by Linda Hardie-Scott
They remind me of the hand-held candles used in protests and memorial services, the flame borne above a flimsy shield.  These past few weeks have been marked in the human world by much upheaval and anguish in many countries torn by civil war, government violence against the unarmed, and the disasters in Japan.  The Japanese ceremony of floating candle lanterns, Toro Nagashi, honors the dead.  The trilliums blooming in the local woods have their own purpose, but they are still bright spots of both hope and memory in these dark times.
Posted by Jennifer Gervais at 12:23 PM