Years ago I took an environmental ethics class in college.  One of the essays we read made the argument that cats cannot have moral standing because cats do not lie.  According to this line of thinking, moral standing belongs only to beings that can recognize the difference between what is real and what is not real.  A lie is a deliberate trip into an alternate reality, requiring advanced cognitive ability.  Moral standing therefore rests on advanced capabilities that belong to humans, not to animals such as sea cucumbers or wombats.  Cats give no indication that they engage in deliberate deception, therefore they have no moral standing.  Bad behavior such as pilfering food doesn't count. 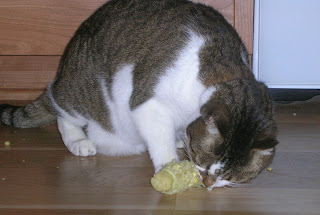 In my years of scientific training, I was indoctrinated against the sin of ever, ever projecting human thoughts, ideas, or emotions onto other animals, domestic or otherwise.  I still accept that the principle is basically sound.  It helps remind us that the perceptions of our fellow organisms are likely very different from our own.  Taken too literally, however, the doctrine denies us insight into our shared biology particularly with other social species.  In other words, cats might lie, but proving it is more than a little tricky in practice.  So much for determining the moral standing of cats, or any other organism besides ourselves.

I am delighted to report that eastern gray squirrels and scrub jays do in fact engage in deceptive behavior. Squirrels appeared to deliberately pretend to bury nuts in empty holes when other squirrels were around.  The researchers who study these sorts of things assume that this kind of behavior pays off as long as everyone steals and everyone cheats- which in the world of squirrels, appears to be the case.  Western gray squirrels haven't been examined for their honesty, but they probably do the same thing. 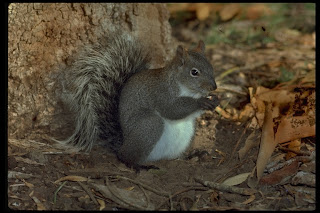 Western scrub jays also deceive.  The jays buried food in trays of soft soil rather than pebbles if they thought another scrub jay was listening, but didn't make that distinction otherwise.  A jay that is hiding food and is caught in the act will move the food- if the jay has stolen other jays' caches.  Naive birds who have never had the opportunity to steal don't move their caches if observed by other jays.  Apparently, only sneaky jays worry about other sneaks. 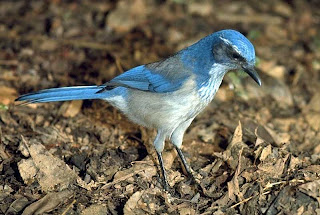 
Which leaves us with some interesting questions: does moral standing therefore require possession of a brain designed to deal with complex social interactions?  And why should we think engaging in behavior most human value systems would consider unethical is necessary for moral standing?

I always have enjoyed watching squirrels and jays, because they are so able to adapt to human disturbance and engage in their own business right under our noses.  College campuses and parks provide convenient settings for scientific observations on a daily basis.  In any case, the drama of social interactions with all their complexity, nuances, and even deception are played out not just among the humans around campus.  It seems that drawing the line between anthropomorphizing and conducting legitimate research may be much more difficult than we once thought.
Posted by Jennifer Gervais at 9:20 PM