It is late summer in western Oregon, meaning the wild blackberries are just ripening, dangling tantalizingly between the wicked thorns of canes that can arch up over fifteen feet in the air.  The canes form thickets impenetrable to animals larger than rabbits.  Come and get it- just don't forget your machete and a willingness to make a small blood sacrifice. 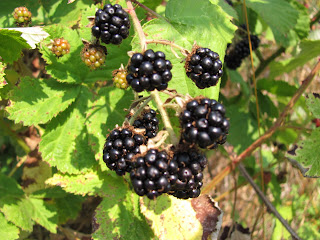 We don't give plants much credit for intelligence, at least not as we typically define it, but the dark, sweet fruit is all about making up for the one thing plants sorely lack once they've put down their roots: mobility on a time scale relevant to getting your kids out from underfoot.  Trouble is, if you dump your offspring right around your knees, you're liable to kill them by outcompeting them, for space, water, and especially light. You are also a magnet for seed predators, waiting for the bounty to fall.  So, somehow, plants have to get their seeds away from them.

Some plants have gone the engineering route, and over time natural selection has outfitted them with pods that burst open, giving their seeds the equivalent of a blast from a cannon, or lightweight parachutes to help them drift away.  These plants don't ask for help from another living organism.  Some plants produce seeds that float to new locations, like coconuts.  Other plants have done some modified engineering, covering their seeds with sticky coatings or grapple hooks to catch a ride on any passing animal.  They are the freeloaders, getting a lift on the sly and offering no compensation for the service. 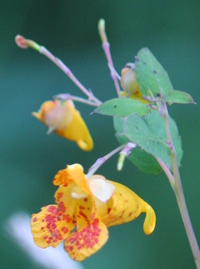 Jewelweed, Impatiens capsensis, has exploding pods, earning it a second name, touch-me-not.  Photo by Catherine Khalar
But plants with fruits definitely do ask for help from organisms that are capable of quick movement.  They pay a fee up front, and hope the agent delivers the goods as planned.  In short, fruits are a biological bribe.

The intended agents are those animals whose guts digest the fruit but leave the seeds unharmed.  The time it takes to process the meal helps guarantee a final deposit away from the parent plant, protecting the seeds both from infanticide and from the usual buildup of seed-eating insects or fungi that prey on the fruit that drops to the ground from the parent plant.  Think of an untended feral apple tree.

Some plants have evolved to rely primarily on birds to disperse their seeds.  Bird fruits are typically fairly small so they can be swallowed whole, and are often black, blue, or red and placed out on the ends of slender branches.  Other fruits appeal more to mammals, with big green or pale yellow fruits, often with an odor.  Many other plants outfit their seeds with small fleshy bodies called eliasomes, that appeal to ants.  The ants take both the seed and the eliasome back to their nests, where the elaisomes are consumed and the seeds are discarded, often in a safe underground spot perfect for germination.  Even fish eat fruit. 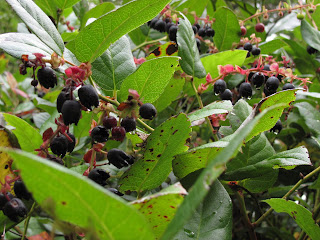 The fruits of salal, Gautheria shallon.  Photo by J. A. Gervais
Some fruits are simply weird, such as the osage orange.  If you've never seen one, it is a fruit the size of a softball and about as appetizing.  You need a hammer to crack one open.  The Missouri Department of Conservation considers the fruits hazardous and advises wearing hard hats in their vicinity.  In her engaging book The Ghosts of Evolution, author Connie Barlow makes a compelling case that such fruits actually are anachronisms, whose main seed dispersers were now-extinct large mammals and possibly even dinosaurs.  These fruits now "disperse" by crashing to the ground and possibly rolling away a little, sometimes helped along by flowing water.  Seed dispersal isn't an exact match of goods for services.

There are plenty of cheats, too, animals or other organisms that take the payment without delivering the goods.  My goats eat blackberries with gusto, but no seed will survive the ghastly conditions of their rumens.  Fungi readily infest fruit, and usually also destroy the seeds.  I've found that banana slugs eat fruit, but they damage a percentage of the seeds they eat, taking a higher payment than planned for their services.  The plant has to offer enough fruit to ensure that some of it falls into the right mouths- the first step, but only the first step, in the chain of events that will ultimately lead to a new plant that will someday produce its own seed.

Animal delivery may also come with a secondary benefit.  Tapirs in South America use latrines, small areas of communal relief.  Along with the rest of the waste, they deposit the seeds of the palm, Maximiliana maripa. Over time, these turn into stands of fruit-producing trees.  Tapir poop, too, seems to discourage the beetles that eat the seeds.  Ant garbage dumps are excellent germination sites for many plants.  Bear poop contains thousands of seeds which later germinate in the clumps of calling cards the bears leave behind. 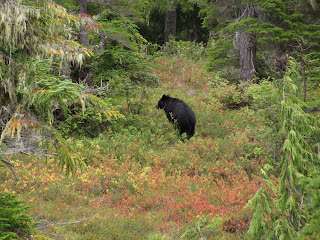 Black bear fattening up on blueberries, Sol Duc wilderness, Olympic National Park. Photo: J. A. Gervais
Hot peppers are my favorite example of botanical craftiness.  Hot peppers get their kick from a compounds called capsaicinoids, which includes capsaicin.  The capsaicin triggers a specific receptor in mammals that is infamous for its response.  It is used in many different cuisines around the world, and also mace (something to think about when contemplating how spicy-hot you want your meal).  Turns out that peppers use birds as seed dispersers.  Birds can't taste capsaicinoids because they don't have the receptors- no tear-gas effect for them.  The compounds do, however, affect how quickly the birds' guts process the meal, shaping the rain of seeds over the landscape, and preventing a huge pile of seeds  from being deposited all in one place.  When that happens, most of them die from the competition.  The capsaicinoids also protect the fruit from attack by fungi, which would destroy the seeds.

The blackberries that are so common locally involve another twist.  They are an exotic species, Rubus armeniacus, originally from the Himalayas.  In open areas with plenty of sun, they can overgrow small buildings, abandoned cars, and nearly any other plant.  They also produce prodigious quantities of very tasty fruit, which feed nearly every wildlife species in the area judging by the bright purple bird droppings deposited on the car and mammal scat along trails in the woods.  Those seeds really get around.  The plant is a pernicious challenge to people trying to restore meadows, pastures, or stream forests.

The blackberry thickets provide shelter and food to small mammals, birds, and reptiles in the forgotten wastelands that have been badly disturbed, but never rehabilitated or fully claimed by people.  At least the thickets are a good fortress against free-roaming cats, and offer a terrific late-summer energy boost to birds about to migrate.  They also provide us with an abundant supply of local fruit for the freezer, and blackberry jam in midwinter is one of the finest wild gifts we receive from the woods and fields around us. 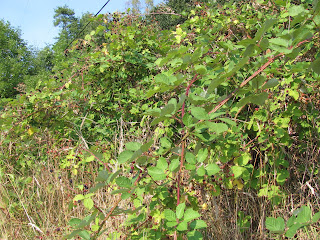 Blackberry thicket overgrowing a roadside.  Local bunnies taunt the dogs from under this natural razor wire.
Photo: J. A. Gervais
Posted by Jennifer Gervais at 10:41 AM