Hope in a White Plastic Box

Among all the bad news about the environment, you don't hear so much about the success stories.  There really are some, and they are very useful not only in what we can learn from them, but also for the hope they can inspire.  Hope is a great motivator for human behavior, probably far greater than we typically realize.  It also generally makes us feel better, and although that observation could naturally lead to a discussion of how we may be hard wired to respond to hope, to a kind of innate optimism, I'd rather discuss a specific event for now.

The subject: Oregon spotted frogs, Rana pretiosa.  These animals might not seem a likely source of hope.  They're a candidate species for listing under the Endangered Species Act.  Candidate species are those that the U. S. Fish and Wildlife Service has determined to be worthy of listing, but the agency just hasn't quite got around to getting the paperwork all done.  There's no regulatory muscle behind the designation.  It just formally states that Oregon spotted frogs might be in some pretty serious trouble.  Unfortunately, it is a common story especially for a species of amphibian. 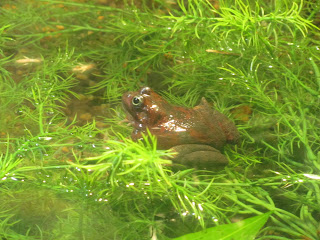 Oregon spotted frog, Rana pretiosa.  Photograph by Dan Rosenberg.
All is not gloom and doom, however.  A group of people, including biologists with the Washington (state) Department of Fish and Wildlife, NorthwesTrek Wildlife Park, the Woodland Park Zoo, the Oregon Zoo, and other organizations has been working to reintroduce populations of frogs into areas where they've been driven out.  It is a complex process, involving a several-year-long evaluation of site hydrology, presence of exotic species like bullfrogs, and potential for disease.  It isn't easy to find sites that pass muster for biological reasons, and the candidate sites are also subject to more human considerations, such as land ownership and other land uses.

Then there's the issue of where you get your frogs.  The animals released on October 6 were collected as egg masses from two sites whose populations were robust enough to handle some baby-snatching.  Egg masses from both sites were then distributed to the zoos and other organizations who reared the frogs.

This is an even more formidable task than finding a place to release any frogs you might raise.  A suitable wetland doesn't look all that spectacular, but it provides the right water temperatures, nutrition, and shelter to turn an egg into a frog.  Mimicking that is actually very, very difficult.  Every species is different.  Will  Oregon spotted frogs thrive on one of the pre-formulated tadpole chows (yes, there are such things), or some new recipe?  Are conditions optimal for proper development?  How do you clean the rearing pens without accidentally throwing out the babies with the tank water?  When you're dealing with a rare species, failure to raise healthy young individuals really isn't an option.

Thankfully, much of the needed husbandry has been worked out, and the project collaborators brought over a thousand young frogs for release into the site.  Frogs were first introduced several years ago, but each year the population is augmented to ensure it gets established and begins to grow on its own.  Although it wasn't the first time, the people involved clearly viewed the release as sweet reward for the arduous care they'd given the thousands of eggs, tadpoles, and little frogs over the last seven months. 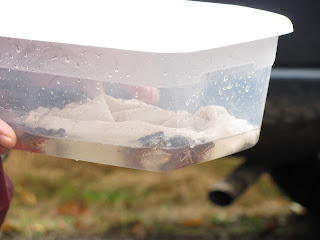 Rana pretiosa just before release.  Photo by J. A. Gervais﻿
﻿Plastic containers were lugged down to the muddy shoreline, lids removed, and the young frogs burst out like popcorn.  Some animals dove right down, seeking shelter.  Others hit the water and bounced right back onto the land, and a few even leaped for the containers.  I had to wonder what passes through the mind of a frog at a moment like this.  "This water is COLD!"  "Where's the frog chow?"  "Whoa!  This isn't what I signed up for, where's that plastic box?"
More serious questions include how exactly an animal raised in a tank is going to know how to find wild food and life-saving shelter, recognize danger in time to escape, and learn to deal with an environment staggeringly more complex and changeable than the conditions it has experienced since hatching.  Incredibly, a large proportion of young frogs seem to figure it out.  I was told that the six-week survival rate is actually quite high.  Not the sort of release strategy that would work for an animal that depends on parental guidance to learn how to survive, but frogs don't look after their young, and they seem to start life with all they fundamentally need to know already programmed into their neurons.  Frogs are much easier to deal with than, say, condors or elephants.  Humans may have invented formal schools, but plenty of other species believe in education.  Not frogs, fortunately, which simplifies things like reintroductions. 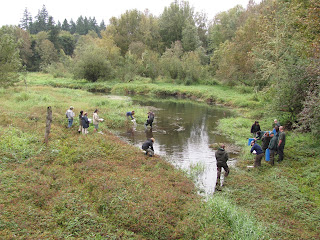 Releasing 300 young frogs into the wild.  Photo by J. A. Gervais
It was all over at each release site in a matter of minutes, at least from our perspective.  We plodded back through the muck, put the now-empty containers back into vehicles, and went our separate ways.
Back in the pond, the new arrivals were dealing with amphibian-centered immigration issues, determining who will get what space with access to which resources.  They were learning how to navigate a new world much bigger than a rearing tank, and populated with river otters, herons, kingfishers, and raccoons.  The long-term payoff that justifies all the work will be the number of egg masses that these animals will eventually lay, and the persistence of this population of the species.  The short-term payoff may be equally significant to the humans involved, a rush of hope, of empowerment, a sense that the situation hasn't completely gotten away from us after all.  There is a chance we can still fix some of the things we've broken. 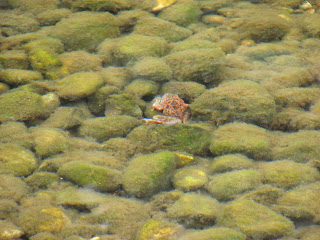 There's a trick to this hiding thing.  Newly released R. pretiosa not quite "getting it".  Photo by J. A. Gervais
It's a brave new world we must face, one full of unimaginable threats.  Recognizing our vulnerability is a crucial first step to survival.  Hope will be equally necessary to motivate us to move forward into the future with strong hearts and open hands, oriented to find solutions to save what we love.  It is good to know that redemption can be found in something as simple as a white plastic box.﻿
Posted by Jennifer Gervais at 7:25 PM