There are still some glorious sunny afternoons as October draws down, but the warmth of the sun is noticeably less than just a few weeks ago.  The turkey vultures have wobbled south on their wise wings, leaving the red-tailed hawks and the chickadees in charge.

In the ground, along with the seeds the chickadees miss, the hatchling turtles are waiting.  They've been out  of their eggs for as much as two months now, paddling free of the one shell they'll shed in this life, to voluntarily wait in the womb of earth their mother shaped until spring brings them a second birth.

Western pond turtles lay their eggs in summer, coming out of the water in long evenings or short nights to find the right dimple in the soil, with the right texture, to dig a flask-shaped hole.  Into this vessel they pour a half-dozen or so fragile eggs.  The mother turtle tamps a plug of earth into the vessel's neck, and then abandons the chamber and its developing contents to fate.  Motherhood as we think of it is not a turtle's strongest suit. 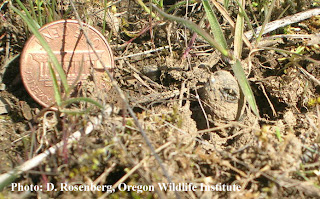 The development of the embryos inside the eggs unfolds to the warmth of the earth surrounding them.  Even the mix of males and females that emerges from the nest is set by the sun, as solar radiation heating the earth triggers cascades of biochemical reactions during a few critical days of development.  In that short time, the power of the distant sun determines each turtle's future role in the propagation of the species.  The eggs will hatch twelve to seventeen weeks after laying.

Sometimes the newly hatched turtles will leave their sanctuary  before winter, but most often they remain inside unless flooding or some other catastrophe forces an evacuation.  Instead, they shelter in place, encircling each other on tiptoe, heads pointing up, and waiting as the short winter days spin past.  They wait, while water percolates through their sometime shelter, and frost makes iron of the earth around them.  Their tissues may freeze, and some of them die from the cold.  The rest of them stand still, embracing both living and dead in the darkness.

What does a turtle think, in the blank black cold, unmoving?  Where are the lines between death and life and consciousness, through the long night?  The gift of golden yolk their mother gave them must sustain their metabolic fires until the little turtles finally venture forth from cold bleak safety.  What is it like for them, to feel the warmth of the sun directly for the very first time, when they are already almost a year old? 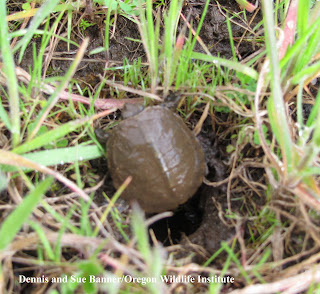 Even then, they wait and do not eat.  Newly minted pond turtles in western Oregon may not venture toward water until mid-May, although they emerge as early as March.  The size of quarters, the hatchlings are cheap snacks for herons or raccoons or wandering mink, and they take shelter in either the narrow hole that protected them all winter, or they move a few scant feet away and use moss or leaves as frail shields against large appetites.

They don't make the abrupt journey to water's edge for another two months.  Maybe they are waiting for the spring sun to chase the last of winter from the pond water, so it is warm enough for a little turtle to digest food and grow without having to rely too much on the deadly risky business of basking.  We do not understand much about this.  Once the young turtles grown enough to escape the mouths of many of their enemies, they'll join their bigger kin on logs or rocks.  That may happen next summer, or the year after.  Until then, they will shelter in mats of floating algae, bits of pond weed with eyes.  Next winter, they'll choose a living burial either in muck at the bottom of some pond or in the leaf litter and soil on the forest floor, but they may get up and move around on good days.  They’ll take with them the memory of the sun, felt and seen, rather than only its echo in yolk. 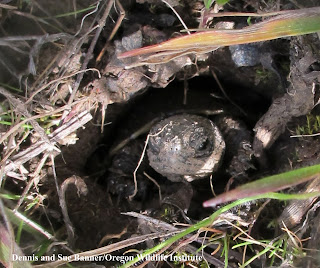 I think of this, as I toss the last of the season's apple windfalls over the fence for the sheep, as the sun swings lower and the old year shuts down.  I think of how the earth shelters both our past in the bodies and bones of our ancestors, and the substance of our future.  Pond turtles are only one more expression of that understanding, and we owe them thanks for that.