One of the reasons I love living in western Oregon is that winter brings another season of life rather than a frozen dead spell, when most organisms either flee or hibernate until spring.  A few mammals and birds tough it out where winter brings snow and ice, but the woods are pretty quiet besides the sound of bare branches scraping in the wind.

Here, the tree branches are free of leaves now thanks to some Pacific storms ranting across the coastal mountains.  The branches aren't bare, however.  The forest is turning a new shade of green, one with delicate pale-gray hues, as the lichens unfurl on every small branch and twig of the oaks and maples.  Thick rugs of newly revived liverworts and mosses embrace the trunks and larger branches.  The snakes and lizards have disappeared, but the rough-skinned newts are out, marching along on their rubbery legs as they begin to move toward their breeding pools. 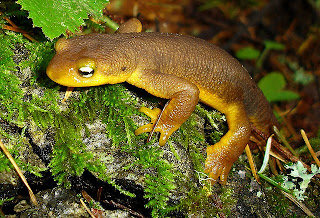 Photo by Miguel Viera, Flickr Creative Commons
The rough-skinned newts, Taricha granulosa, appear when late fall finally eases the harsh seasonal drought with the misty rain.  The newts are both numerous and active during daylight, unlike any of their kin.  They are encountered more often than they are noticed, judging by the number of flattened corpses on the road leading to the forest gate, and sadly, even in the woods where vehicular traffic is replaced by bicycles and walkers.  It isn't always adaptive to look like a somewhat rotten stick when viewed from above.

Rough-skinned newts tend to freeze in place if startled, although they can move along at a good clip if they decide they need to.  They are patient, and will stand motionless in mid-stride for many minutes if disturbed.  Their second line of defense is to curl in a distinctive ring, head thrown back, tail arched toward their throats, exposing their undersides in bright warning.  This dance to avoid being eaten is called the unken reflex, and it is shared among salamanders, toads, and frogs who defend themselves using chemical warfare as a last resort. 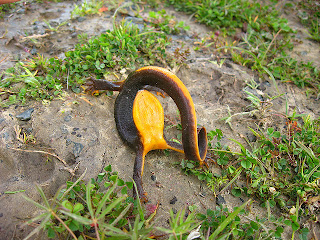 Unken reflex.  Photo by Ap2il, Flickr Creative Commons.
In the case of the newt, the bright orange color is backed up by tetrodotoxin, a potent neurotoxin, one shared with the blue-ringed octopus, a few toads, and some fish, most famously the puffer fish.  The Japanese serve a dish called fugu, which ideally offers the adventurous diner tingling lips but if not expertly prepared, leaves the victim paralyzed then dead through respiratory failure.  The Seattle Audubon Society's book Amphibians of the Pacific Northwest(1) reports that people have died from eating newts in the genus Taricha, although they do not reveal the circumstances.

How exactly such a diverse group of organisms have hit upon the same defense strategy is still unclear, although some researchers have suggested that symbiotic relationships with bacteria who synthesize the tetrodotoxin may explain the pattern(2).  Not everyone agrees, however, that this is how the newts acquire their chemical weaponry(3).  All stages of the newt are toxic, and mothers seem to pass on the poison to their eggs.(4)  Individual newts have variable levels of the toxin(5); presumably it is biochemically expensive to manufacture, and you might get by with a less stringent defense if your enemies expect all members of your species are equally bad for the digestion.  The predators, however, are on to the game.  Common garter snakes (Thamnophis sirtalis) have immunity to the poison(6), although they may become toxic themselves from the tetrodotoxin that builds up in their livers after eating several newts(7).  Larval dragonflies will snack on larval newts, and seem able to discriminate the palatable individuals from those best left alone(8).  Ultimately, any strategy is a gamble, and staying alive means playing the odds.

The chemical-defense strategy may not be the best option in this new world dominated by humans.  Cars do not notice unken reflexes, nor do fast-moving bicycles respond to poison.  Newts can live a long time if they avoid tetrodotoxin-resistant snakes and savvy dragonflies.  Like many long-lived species, they reproduce slowly, with few offspring reaching adulthood.  Their populations are poorly equipped to lose many members to novel death traps.  When I find a newt on a road or a popular path, I promptly give it a lift to the other side, hoping it will keep moving away from the ribbon of danger it cannot hope to comprehend.

In December, we'll begin looking in the drainage ditches and small ponds in our area, hoping to see the graceful, slow dance of the swimming newts as they gather to mate, then lay eggs long before the first buds appear on the trees.