This week marked the third anniversary of a significant scientific discovery made by my dogs.  We were out on a walk on a messy afternoon marked by mud, driving rain, and wind, courtesy of a Pacific winter storm.  Young dogs still need their walks, and so do their owners.  I can't really say quite how it happened, other than as I bent down to discharge my responsibility as a dog walker after my old dog had finished her business, I glanced back and saw the young one standing with a long pinkish stringy thing hanging from his jaws.  He looked quite pleased with himself, and was an instant away from flinging up his head and consuming his prize.  I witnessed this in the split second between discovery and annihilation. And somehow I knew that he absolutely must not be allowed to eat this thing, not for any risk to himself, but because of what it was.

I leaped at him, howling at him to drop it, which is absolutely not how you are supposed to train a six-month old pup to surrender highly desired objects.  Fortunately for science, he was so shocked at my behavior he did drop it, and in his moment of indecision I swooped on his find and scooped it into a spare plastic bag.  The dog was utterly unimpressed at my inexusable theft of what he regarded as rightfully his.  There are times when I wonder whether he still remembers this.

At that time, however, we went home, and I laid the dog's find out on the counter.  It was an earthworm, and it measured four feet four inches long.  It was flabby, pale pinkish-gray, impossibly thin, and quite dead.  It was also the first specimen of the Oregon giant earthworm, Driloleirus macelfreshi, to be documented in twenty-seven years.  We know very little about this species, other than it seems to be endemic to the wooded bottomlands of the Willamette Valley.  It had been pretty much assumed to be extinct.

There are many little pieces to this discovery, each of which made that sudden, instinctive recognition on my part possible.  Over a decade ago, I had the great fortune to meet two of the last earthworm taxonomists in the world, Dorothy McKey-Fender and her son, Bill Fender.  This in itself was a culmination of improbable circumstances, but the crux was a workshop, conducted by Dorothy who was then in her eighties, on how to identify native earthworms.  The workshop was followed by a search for native worms in 2000.

Bill Fender and Dorothy McKey-Fender with a specimen of Driloeirus macelfreshi in their laboratory in 2000.  Photo: D. K. Rosenberg
I know a little about earthworms, as much probably as any average gardener or curious naturalist knows.  Native worms have been largely replaced by exotic species, and most of the worms we see as we go about our daily lives are descendants of recent immigrants to this continent as most of us are.  Ecologically speaking, we do not even know what we've lost, because the native worm fauna has been very poorly studied and described.  We do know that different families of worms behave differently, and affect nutrient turnover and soil humus in different ways.  We do not understand all the implications, although they include reducing the humus layer, which is itself a vital habitat for many organisms, and allowing exotic weeds to establish on the surface of soil no longer protected by that deep blanket.  For the most part, though, we just don't know what we've broken or what pieces remain somewhat intact.

There are earthworms out there, native worms, very different from the nightcrawlers we all immediately identify as the ultimate worm.  Even more amazing, there happens to be a gigantic native worm called the Oregon giant earthworm, Driloleirus macelfreshi.  Dorothy McKey-Fender herself had studied most of the specimens that have ever been collected- a scant few dozen in all.  They were far too rare to allow the workshop participants to examine, but Dorothy moved around the lab room set up with dissecting scopes and trays filled with other worms pinned to the black wax, delighted to share some of the knowledge accumulated over a lifetime.  Her love and respect for these animals was palpable, and her excitement contagious.  I've been more aware of worms since then, for their own sake, not just for what they do.

So there we were, in a wet riparian forest at the tail end of a storm dumping heavy rains, swelling the Willamette River until it licked and curled at the bases of the cottonwood trees along its banks.  A party of several people and several dogs ahead of us had walked right by the corpse of the giant worm lying on a bed of fallen leaves, not far from the floodwater's edge.  I would not have noticed it either, if my young dog hadn't loved to eat dead things.  But at least in that instant of seeing it, I was open to the existence of giant native worms.  Without that, the discovery would not have been possible, even if I had still looked straight at my dog in that instant before he snatched and swallowed. 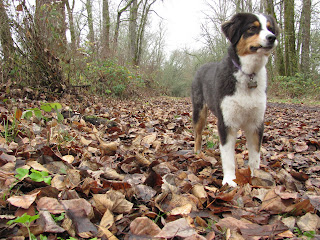 Looking for another giant worm- the last one was right around here somewhere...
The worm is now among those in the McKey-Fender collection, although a small segment of the tail sits in a vial on my desk for possible genetic analysis.  More importantly, we know we can still look along the rivers and woods and hope for more than we recently dared hope for, that one of the unique forms of life on this planet may still be with us.  If we can be open to those possibilities, I hope we can also be open to more creative visions of how to live more gently and equitably among all of our fellow species.
Posted by Jennifer Gervais at 12:27 PM