There are two edges to the sword of change that is slicing through so much of the biological skin of our planet.  The first is the staggering loss of biological diversity, adding up one of the great waves of extinction in Earth's history.  Along the trailing edge, ecosystems and the species that evolved in them are under increasing pressure from species new to the system.  We pay a lot of attention to the problem of extinction, but much less to invasion, even though it can and does contribute to the former.  It is perhaps a bit easier to rally to save a charismatic species such as a panda rather than organize to fight the diffuse threat posed by signal crayfish or purple loosestrife or kudzu.  However, scientists have started asking why some species become so destructively overabundant even though close relatives may be on an endangered list.

Behavior alone won't dictate success.  Species that establish in new places also tend to be introduced over and over,  increasing the odds that eventually, a few individuals will survive the initial colonization event.  This in turn may be dictated by who lives where the most common transport routes start.  However, individual behavior seems to play a larger role than we expected.

Kudzu consuming a barn in North Carolina. Photo: NASA
If you want to successfully colonize a distant planet, you might consider taking a close look at how this works right here at home.  First, you've got to get yourself on some kind of transport vehicle, whether in the gut of another animal or the hold of a trading vessel or cargo plane headed elsewhere.  Realize you're probably not a welcome passenger, so you've got to be discreet.  You have to survive the journey, which means somehow finding or maintaining conditions in which you can live, with enough water, warmth and energy to avoid death.  Once you arrive, you need to sneak out of the way lest you be caught in the act and exterminated.  Very few stowaways make it this far, but the journey isn't over yet.  You need to find appropriate food, water, and shelter in these new, unknown surroundings.  Eventually, you need to reproduce successfully, which means you need to find, recognize, and successfully interact with a mate.  Next, your children must also raise children.  The resulting little community must avoid being found and eradicated, and finally, new colonists must leave and establish more communities before the invasion can be considered a success.

The odds, in short, are heavily stacked against you.  However, even if animals don't get help (in the form of deliberate introductions by people, such as starlings in North America, cane toads in Hawaii and Australia, or possums in New Zealand), some species still manage to pull it off.  We've just started to think about how animal behavior influences the risk of successful invasion. 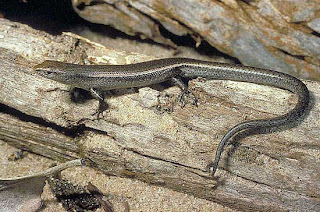 Delicate skink. Photo: Peter Robinson, Museum Victoria, Australia
The delicate skink, Lampropholis delicata, and its cousin the garden skink (Lampropholis guichenoti), illustrate the point.  The delicate skink is native to eastern Australia, but has managed to colonize New Zealand, Hawaii, and Lord Howe Island.  The closely related garden skink, however, has stayed home even though it is quite similiar to its more adventurous cousin in many ways.  The two skinks are similar in size, have similar diets, and similar life histories.  Both species live together in urban areas in Australia, close to transport hubs such as major shipping ports and airports.  Both are common, and occur at high densities, suggesting no lack of individuals available for export.  What, then, is different?

Although both skinks like to explore new environments, the delicate skink was far more willing to move through a tube when it couldn't see the exit, enter a small black box in the test cage, and walk up a graveled ramp to reach a heat lamp suspended above the cage floor.  A greater willingness to explore, then hide, may explain a good part of why delicate skinks are called plague skinks while garden skinks have been at worst temporary tourists who never established outside their native range.  The opportunity to become a problem appears to be the same, but the behavior of the animals influences who takes advantage of that opportunity. 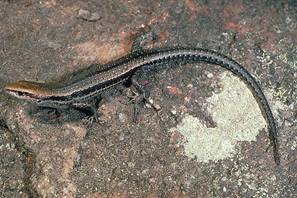 Garden skink.  Photo: Peter Robinson, Museum Victoria, Australia.
Not all delicate skinks successfully found the elevated basking site; animals, after all, are individuals.  Other research found that individual mosquitofish vary in their tendency to strike out for new horizons.  Interestingly, fish that chose to disperse also seemed less tolerant of other mosquito fish, and these personality traits were consistent in individuals over the study.  There may need to be a range of personalities and behavioral tendencies to support a successful invasion from start to establishment.