There are two more dead deer lying along the road that ends just a few miles from town.  One is a doe, probably pregnant, the other a young buck just out of rut.  Someone has stopped and sawn off the antlers of the buck but both carcasses remain in the ditch, apparently inaccessible to scavengers.  They are hardly visible from a car, and possible to overlook even from a bicycle, as the cold weather has prevented the usual tell-tale smell. 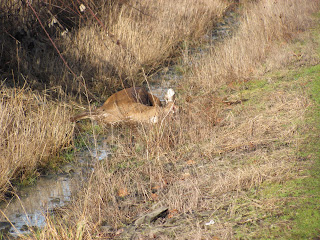 We think of roads as opportunities for our own rapid movement and convenience, if we think about them at all, not the ribbons of death that wind through the home ranges or migration routes of many animals.  Stand at a rest stop along a busy interstate and see how many seconds pass in which there are breaks in traffic from one side of the highway across all lanes to the other side.  Not surprisingly, research has shown that roads can be major obstacles to animal movement.

How much roads cut off movement depends on not only the traffic load but the animals themselves.  Some animals such as urban gray squirrels seem almost oblivious to the traffic despite the risk and frequent near-misses.  There are video clips of urban wildlife using crossroads and even apparently waiting for lights to change before they cross.  They include deer, gray squirrels, coyotes, and Japanese crows.  The crows, of course, can easily fly over the traffic, but it seems that some of them have figured out that if they drop nuts into the crosswalks, cars will run over them, and the cracked nuts can be retrieved when the light changes.  These animals have adapted to live in the new world we've created for them. 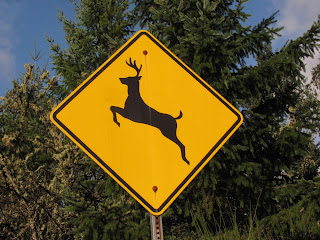 But the vast majority haven't adapted.  Desert bighorn sheep populations are already showing reduced genetic diversity in just four decades after interstate highways threaded among them, raising the risks of extinction for the now-isolated populations.  Cougars avoided two-lane paved roads although dirt roads did not deter them.  Both wolves and elk in the Canadian Rockies avoided roads and trails in national parks as their traffic increased, but elk were less repelled and actually used the areas near moderately busy trails as predator-free zones because the wolves appeared more sensitive to the disturbance.  There are gradients in responses, and consequences.

At the other end of the spectrum, freshwater turtles don't seem to recognize the danger.  Turtles moving between two wetlands in Florida were willing to attempt to clamber over a barrier made of plastic netting to cross the busy highway separating the wetlands; nearly all those that succeeded were killed.  Populations of turtles near roads have a sex ratio skewed towards males relative to populations away from roads. More dead  female turtles are found on roads than males because the females are driven to leave the safety of water to find nesting sites.

The biggest issue may not be just the body counts, as staggering as they may be (upwards of 350 million wildlife deaths per year in the United States).  The worst thing about road kill may be what it reveals about our own fundamental thoughtlessness.  We are the one species that seems able to contemplate killing in an abstract way, evaluating the moral and ethical consequences of taking another's life.  The vast majority of us would not describe ourselves as careless killers, and would claim to avoid causing senseless death when possible.  Then we get into our cars. 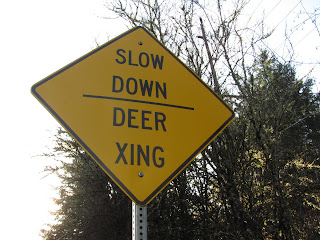 The speed limit on the road with the dead deer is fifty miles an hour.  Every branch of this winding road ends a few miles farther into the hills, serving an exurban bedroom-community development.  People claim to like living in the country because they enjoy nature, but nature had better not get in the way of easy access to town.  Of course, very few wildlife-vehicle collisions occur on purpose; after all, people are often also victims of severe injuries or death when large animals like moose are involved.  But nearly all animals that are hit die.

When animals die of natural causes besides predation, they tend to die in places where scavengers can get to them, so that the occasion of death is also an occasion for the continuation of other life.  One of the elements of roadkill is its wastefulness, because the traffic may prevent scavengers from at least cleaning up after our carelessness.  Worse, other animals may be attracted to the bounty then also die in traffic.  This is only one aspect of the particularly repugnant facets of road kill.  Another facet is its anonymity, with neither killer or victim aware of the other.  It is the ultimate in thoughtless take. 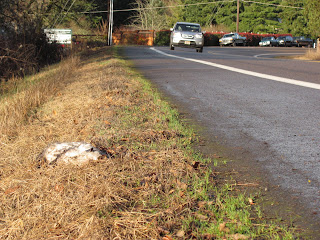 The vast majority of victims are not ever seen before being hit, especially if they are low to the ground and cryptic, like snakes, lizards, or salamanders.  It is easy to ignore the carnage if you never see it, easy to believe that you don't contribute to it, easy not to think about it at all.  What if we did think about it?  What if seeing a dead animal, even a snake or a slug, required a moment of reflection and grief?  We would have to slow down enough to see the corpses.  If we slowed down, there would be far fewer of them.  That would be one benefit.  The process of acknowledging the losses might have a far greater benefit, that of helping us recognize our own place in the scheme of life, the first critical step to salvaging our planetary home.
Posted by Jennifer Gervais at 7:49 AM