Of Love and Dancing

The albatrosses began to return in late October.  One day I looked out from our cook tent and there were perhaps a half-dozen of the huge white birds standing serenely on the sand, looking both grave and comical with the stark, sharp beauty of sea-gray wings folded crisply across their backs.  They waddled uncertainly over the dunes to just the right spot, there, that's the nest, right there.  A few days later, there were hundreds, and a week later, thousands.  Their season on the tiny speck of sand in the middle of the Pacific had begun. 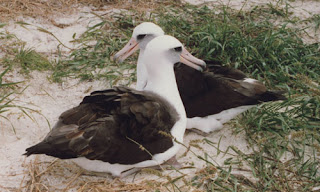 Laysan albatrosse pair on Laysan Island.  Photo: J. A. Gervais, 1992
You can find Laysan Island on most world maps, although it is only about a mile and a half long, a mile wide, and cradles a large super salty lagoon.  Essentially it is nothing more than a large sand dune perched on a remnant volcano.  There isn't much else out in this part of the world, a thousand miles northwest of Honolulu, and Laysan is the second largest of the Northwestern Hawaiian Islands.  For a few years over a century ago, it was inhabited, briefly, by humans, who mined the guano, harvested the albatrosses' eggs, and killed the birds for their feathers.  It has belonged to the birds for many thousands of years.

Land is a rare commodity in the middle of the ocean, and all seabirds are tied to it for breeding.  The birds of Laysan do a time-share, where different species come in from the far reaches of their wanderings and breed at different seasons.  Winter belongs to the bonin petrels, the black-footed albatrosses, and Laysan albatrosses. 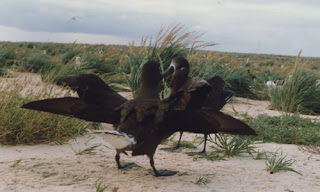 Blackfooted albatrosses dancing, Laysan Island.  Photo: J. A. Gervais, 1992.
The albatrosses were mostly quiet at first.  It must be very strange, to land on unyielding ground for the first time in nine months, and the newest arrivals seemed to suffer from the same "sea leg" syndrome that people do.  They wobbled around and studied the clumps of bunchgrass and their neighbors in silence.  But as the few birds swelled to thousands, the singing and dancing began in earnest.

Albatrosses dance.  These are spectacular dances, involving wild bows and snapping beaks, with some individuals becoming so excited they gape and scream, whipping their heads back and forth.  They whinny and moo and clap that huge beak.  Sometimes they throw themselves up on tiptoe and point skyward, with a soulful moan at the apex.  The black-footed albatrosses have a different dance than the Laysan albatrosses, but both dances are exotic, energetic, and incredibly noisy.  Living on a colony numbering tens of thousands of pairs is like being in the middle of a demented barnyard. 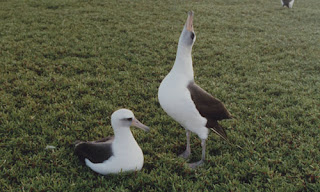 Laysan albatross skypointing.  Photo: J. A. Gervais, 1992.
We quickly learned that young albatrosses were so anxious to get going with their adult lives that they would throw themselves into a frenzied performance if we just waved two fingers back and forth in front of them, mimicking the first moves of the dance.  When we failed to deliver the correct response partway into the performance, they would retreat hastily, looking flustered.

I tried coaxing a few of the pairs who settled into spots right around my tent into a cross-species tango.  These birds' mates had already arrived, and after a few passionate rounds of dancing it seemed that old ties were renewed well enough to get down to the business of breeding.  Waving fingers in front of these birds elicited a sidelong look.  The albatross would draw in its chin, that huge, hooked beak held down along its neck, and waddle emphatically away.  Sometimes interspecies communication is shatteringly clear.

Every now and then, a Laysan albatross and a black-footed albatross mate, and raise a chick.  The chick, however, is doomed to be completely unlucky in love, because its dance is stuck halfway between the species.  Nobody seems to want a partner who can't do all the right moves.  The vast majority of birds belong to one species or the other, however.  Nearly all find a partner and stay together for many years, renewing the relationship each autumn with the ritual of the dance. 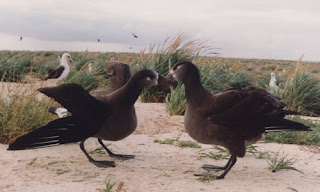 Blackfooted albatross dance on Laysan Island.  Photo: J. A. Gervais, 1992.
I worked on Laysan for a magical four months, picking away at invasive grass that provided shelter for none of the birds, but crowded out the native bunchgrass that nearly all of them need.  Although the work was far from special, sneaking by sea turtles and monk seals, admiring the antics of boobies and albatrosses, and watching tropicbirds and frigatebirds engage in aerial warfare made even plodding over sand dunes carrying backpack sprayers full of herbicide the best job I ever had.

I left Laysan Island on a November morning nearly twenty years ago, and I still dream sometimes of the intense color of the sea, the enormity of the sky, and the noise of all those birds.  It was an early love, one you don't forget, even if you go on to fall in love with many other places.
Posted by Jennifer Gervais at 9:16 AM