The Balance of Voles

The barn owls will be nesting very soon.  They've already started the process of dating, the males bringing Valentine's gifts of dead voles to their prospective mates and spending the daylight hours together tucked safely away in a dark corner somewhere.  If the female likes the gifts and the company, she'll soon begin laying her white eggs, counting on the male to provide all the food for her and then the entire family for weeks to come.  Hundreds of voles will be consumed in the process.

Some years ago, I provided some dark corners in the form of nest boxes to see if barn owls might help the local farmers with the ebb and flow of wild voles, which can cause thousands of dollars per farm in crop damage in a peak year.  I put out eighty boxes spread between two counties, in strings of three to five boxes per fence row.  The study finished several years ago, the funding gone, the results inconclusive, but the boxes are still standing.  To help out both the owls and the farmers who gave me access to their lands, I go out each December and maintain the boxes. 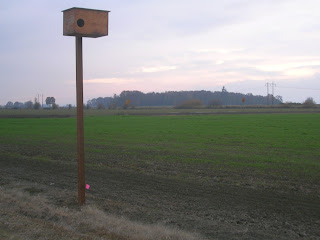 Farming must be the most difficult form of legalized gambling, where those who farm have to work very hard, in often physically demanding and dangerous conditions, in hopes of producing a crop that can then be sold at a profit.  Almost nothing in this process seems to be in the farmer's control beyond the calculated decision of what to plant.  More so than any other livelihood directly linked to natural resources, farming is a long-term gamble, a balance of good weather and not too many pests, then favorable market conditions.

Barn owls rely on small rodents for their living.  The females will lay up to thirteen eggs, although the average clutch is closer to five eggs.  They hedge their bets by incubating during laying, so the eggs hatch over several days and the young owlets range in size.  The biggest owlets eat first.  In a pinch, they'll eat their younger siblings if the parents do not bring enough voles.  In the best of years, the adults will raise a second brood.

The farmers I work with like wildlife, and do what they can to accommodate the owls while they also pursue a precarious living.  Far more than most professions, farming reminds us that nature is ultimately in control, and we all rely on good weather, healthy soil, and clean water far more than most of us remember.  For a farmer, it is each year's bottom line, the balance between inputs and outputs tipping precariously on the edge of the appetites of voles.  Unfortunately, the appetites of owls are not great enough to swing the balance on the bad years, but they help.  Barn owls nesting in a barn make a mess but are usually tolerated.  Barn owls in a nest box are universally welcomed. 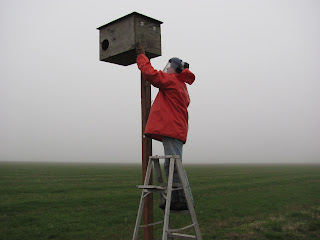 Cleaning out a nest box.  Photo: J. A. Gervais

The necessary maintenance of a barn owl box requires cleaning out the detritus of the past year, occasionally making repairs to the flap, or reinforcing the connection point between box and post.  Although natural cavities may fill with nesting material and prey remains over the years without much problem, the weight of all that material in a box that leaks a bit is much too great to be allowed to build up over time.  Armed with a gardening hand rake and a face shield, I open the flap, reach inside, and haul out all manner of rubbish into the dim December light.  It is a messy act of renewal.

My assistants are frequently showered with starling nests, great wads of sticks and straw that nearly fill the generous cavity.  It is usually raining, so the rain gear we wear serves a dual purpose.  Other unknown inhabitants bring bits of lichen and moss, or a few strands of grass.  Kestrels leave almost no traces of their nests, and a box used as a roost by barn owls may give no hint of its sometime occupants.  In a year with abundant voles, sometimes a vole carcass or two comes cascading out of the box, often with little else; we put those back, as they were put there by someone as a hedge against hard times.  Sometimes deer mice take up residence, bringing a light fluffy mass of shredded bark and leaves inside.  Others are empty except for a the abandoned comb of the paper wasp.  A barn owl nest, however, is an entirely different story. 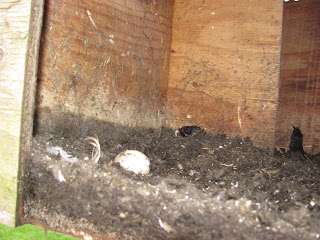 For those, I whack away with my hand rake at the thick, compacted mat of fur and bones and nameless dried goo, cemented in layers if the box is in the lee of some trees, a wet sodden mass if the rain can get inside.  Sometimes we find the remains of a young owl that did not survive the nestling period, or an unhatched egg now dessicated and filthy.  There is some satisfaction to getting all that mess out of the living quarters, leaving things ready for another year's accumulation.  Farmers, meanwhile, maintain tractors and other equipment, and soon they too will be getting down to the business of the year in the fields.

It is hard to leave a warm house on a cold, wet December morning before dawn to spend the day plodding along the fence lines in the rain carrying a ladder for miles.  There are compensations.  Sometimes we're given beautiful views of light and cloud, the song of a flock of swans, the calls of killdeer or snipe, and occasionally, the silent explosion of a white and fawn barn owl, as it exits the box just as I raise the flap.  There's time for the owl to get over the fright before the decision of where to lay must be made.  There is still time to plan out the new year, room for hoping for a good harvest and the right balance between voles and owls and people, all counting on the green grass in the fields.

Posted by Jennifer Gervais at 5:52 PM