The various contrivances of orchids

I joined the local orchid society this winter.  The months of soggy dark require unusual coping measures at times; the displays of blooming orchids on the "show and tell" table at the monthly meetings alone are worth the membership.  My own little collection isn't doing too badly.  My phalaenopsis and paphilopedilum are blooming, and the zygopetalum's buds are swelling steadily. 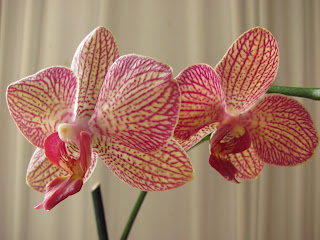 Phalaenopsis, known as the moth orchid.  Photo: J. A. Gervais

Orchids make up the largest plant family on the planet, with about 24,000 species.  They live in a staggering array of environments, from the tropical rainforests most of us associate with them to tundra environments, in the deep shade and out in the open sun, perched in trees or on the ground.  They are united, however, in their extraordinary biology, making use of an incredible array of other organisms to help them through their life cycle.

The local orchid society has about thirty members, small enough that guests are immediately recognized as such and welcomed with enthusiastic delight.  How do you not join a group of people who love to talk about flowers?  The skill level ranges from experts who hone their skills cultivating the most challenging plants, to people like me who can kill just about any orchid effortlessly.  I suspect the experienced growers look on us neophytes as a great way to clean out the clutter of their greenhouses: giving an extra orchid to someone who at least admires it seems less heartless than throwing it straight on the compost heap.  I view it as a type of symbiosis, although the plants may not.

Orchids have developed trans-species  interrelationships to a remarkable degree on several fronts.  The seeds require the services of a mycorrhyzal fungus in order to germinate, relying on the fungus to make up for their lack of endocarp.  Many species are epiphytes, perching on the trunks and branches of larger plants.  The pseudobulbs of other orchids harbor ferocious ants that offer protection to their hosts.  Most noteworthy, some orchids have developed extraordinary coevolutionary relationships for pollination. 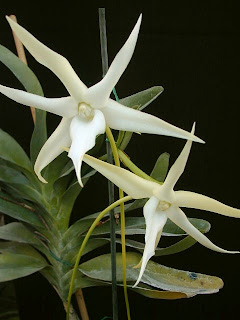 Anagraecum sesquipedale.  Charles Darwin hypothesized that this magnificent orchid is pollinated by a hawk moth.  The moth, Xanthopan morganii, wasn't discovered for another 41 years, and proof of pollination services had to wait 130 years after Darwin's insight.

Although many flowering plants have built relationships with animals for the purposes of both pollen delivery and seed dispersal, orchids have gone to extremes.  The pollen of the vast majority of plant species is released as a dust of individual grains, but in nearly all orchids pollen is wadded up into two to twelve waxy balls, called pollinia.  It's a high-risk strategy, because each flower on the plant (and many produce only a single flower) has exactly that many chances to fertilize another plant's flowers for seeds.  It's a twist on putting all of one's eggs in a very few baskets.

The pollinia are designed for long-distance transit.  Pollinia on hawk moths in the wild have remained stuck in place and ready for deposit for over three weeks.  Insects, birds, and moths that visit orchids may have multiple pollinia stuck to their heads, beaks, and proboscuses like yellow bunny ears.  Different species of orchids place their pollinia in slightly different positions on the pollinator, ensuring correct delivery when the animal visits the appropriate orchid species again.

This trait can be quite useful for someone interested in propagating orchids, and in creating new hybrids.  It isn't hard to use a pencil or other pointed object to lift the pollinia free of the flower column; they will quickly bind tightly to the object and orient themselves for maximum contact with the receiving flower's stigma.  It is a system easily manipulated by people.  In fact, we're the only mammal that pollinates orchids.  Once fertilized, the flowers quickly wilt.  This, announced my high school biology teacher with a wicked grin, opens up interesting possibilities if you don't like the prom date to whom you are expected to offer an expensive orchid corsage.


The flowers are all about sex, as all flowers are, but for some orchids it's a double entendre.  The sneakiest orchids are those whose flower parts have evolved to resemble female insects, complete with a release of chemicals that mimic the insects' own pheromones.  The strategy is known as pseudocopulation, as the befuddled male insect attempts to copulate with the flowers, and gets tagged with a pollinium for his pains.  Presumably he either doesn't learn, forgets quickly enough, or becomes desperate enough to visit another orchid of the same species before he dies.  The odds are long, and because of that the flowers remain intact for many weeks.  This is, of course, one of the characteristics that makes them so irresistable to humans bent on romance. 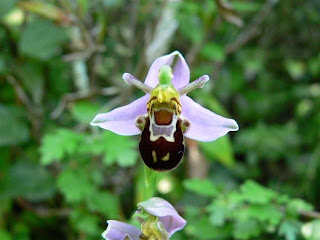 The aptly named bee orchid, Ophrys apifera.  It is pollinated by male bumblebees and is an example of pseudocopulation.  Photo by Nancy Cottner


Not all orchids try to forgo paying the pollinators for their services through deceit.  Many offer nectar, which varies in sugar concentration depending on the pollinator. Specialized avian pollinators such as sunbirds earn the highest reward; hawk-moth-pollinated flowers offer a somewhat lower sugar level, and the least concentrated nectar is payment to the least-specialized pollinators from the more generalist orchids.  Within the flower, the most concentrated nectar is the farthest in, encouraging a good push to obtain the reward, and maximum contact with the pollinia.  Other orchids offer scents or waxes and resins that are gathered by their pollinators.

My fellow orchid enthusiasts range from generalists who do not seem to have ever met an orchid they didn't like, to those who specialize on one small subgroup.  Some folks seem taken up entirely by the challenge of the cultivation of the most exacting varieties, whereas others of us are unapologetic fans of the lowest-maintenance plants that reliably produce bright, interesting blooms with the least amount of fuss.  We're all in it for the flowers.

For all their trickery and bribes, less than one in five tropical orchids typically achieves fruit set in the wild.  Pollination is generally thought to be the limiting factor for reproduction in wild orchids, even with their absolute dependence on fungi for seed germination.  Wild orchids are perhaps most amazing in the fact they exist at all, let alone having successfully woven themselves into the ecological fabric of so many places.

The orchids on the monthly show and tell table are often so hybridized by human breeders that the names of the crosses don't always fit on the plants' tags.  These are organisms of the greenhouse and windowsill, depending on the passion, space, and financial allocations of the owners.  I asked one of my fellow club members how many plants he had.  "Seven hundred, I think," he answered.  "I have two greenhouses now.  We all started with a few orchids on a windowsill."  Orchids have been amazingly successful at bending yet another species to the task of continuing their existence.

I swear my little collection isn't going to need more space than my windowsills.  Soon, after the peas have sent up tendrils and the lambs have all been born, I'll be out in the woods hunting for my favorite orchid: Calypso bulbosa, which grows in heavily shaded understory, and tricks bumblebees into pollinating it.  I don't have to do anything at all, except admire it and the extraordinary ecological relationships that sustain it.  I don't think, however, that either the club members or their orchid masters have given up on me. 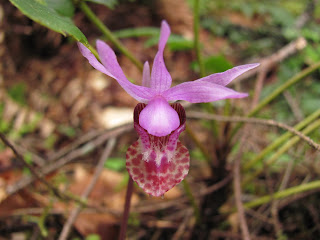 Posted by Jennifer Gervais at 8:16 PM