We had chickens once before, until a persistent weasel and an interstate move together conspired to eliminate that first flock.  Starting another flock has been on the projects list ever since, and this spring Dan managed to borrow all the equipment necessary for starting chicks.  This led to the building of a sturdy little coop so all would be ready for the moment the as-yet unpurchased chicks grew large enough to need it.  The coop led our neighbor to help us acquire six yearling New Hampshire Red hens that had reached the end of their lives as research subjects at the local university's poultry program. 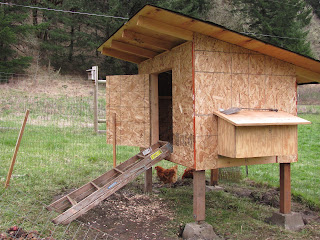 Why wait five months for your chicks to mature just in time to stop laying as winter sets in?  We thought these hens would likely be solidly at the peak of their egg production, and the idea of rescue appealed to us as well.  New Hampshire Reds are known to be hardy birds with a proclivity for brooding.  This is handy if you have a rooster and a desire to keep your flock growing with some new broods of chicks occasionally.  A few days later six refugee hens came home in an assortment of cat and dog transport crates to begin new lives on our little farm.

The university raises chickens according to industry standards.  This means each hen had spent her days in a small cage just big enough for her to turn around in, with a sloped wire floor.  When an egg is laid, it rolls down into a collection chute.  It is possible that these hens never get to inspect an egg up close.  They also don't get to give their wings a good stretch, scratch and peck on the ground, perch, or engage in a lot of other typical chicken behaviors.  We wondered how they would adapt to a barnyard.

We kept the hens confined to the coop for several days to adjust to their new life as real, live chickens rather than industrial egg production machines. Our coop is small but it was still much more space than they'd had for most of their lives, and included a window with a view of the sheep pasture, branches to perch on, nest boxes, and a layer of shavings to scratch in.  It must have been a staggering change. 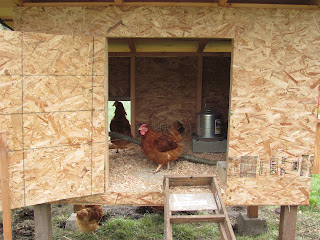 Instinct, that knowledge we hold without thought or learning, is a powerful force.  A hen kept her entire life in an indoor facility under artificial lighting in a small cage still knows what to do when she's presented with a patch of dirt and grass.  The first day we opened the door, the chickens learned to navigate the ladder to the ground, and soon all were pecking, scratching, clucking, and interacting as if they had never been anywhere else.  Except for one crucial detail: they did not recognize their own eggs.

A challenge in backyard chicken husbandry is to prevent your chickens from ever learning what good food eggs can be.  If the shell cracks and a hen takes an exploratory peck, she'll enthusiastically eat the whole thing, shell and all.  Once she sees an egg in this light, there seems to be no going back.  We quickly discovered that our six hens had no idea what to do with eggs, laying them carelessly around the coop and outside in the mud.  Very soon after that, despite our constant checks to remove the eggs as quickly as possible after they were laid, at least one chicken took an exploratory whack.  We haven't gotten an egg since.

I tried to break the habit or at least prevent all the hens from learning it by stocking the coop with some wooden eggs I acquired from a craft store selling Easter supplies.  Unfortunately, the reward of hitting a real egg seemed too great to discourage a hen who simply came up with a jarring thud when she explored the possibilities of one of the wooden ones.  Dan watched one hen attack a decoy egg so savagely that she pushed it halfway around the coop.  Motherhood was clearly not in her future, nor in any other hen's future if the infanticidal chicken remained part of the flock. 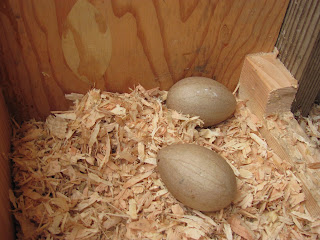 Of all the instincts that constrictive captivity had broken, it was the one most critical to the long-term survival of the species: thou shalt not eat thine own children.  The drive to reproduce is so strong that many animals risk their lives to mate or defend their young, or push themselves to the point of starvation to provide for them.  It is sobering to think that we have managed to subvert the basic wiring of being a chicken to the point it cannot recognize its egg as its own.

This isn't the worst we've done.  Meat chickens are bred to grow so quickly that their legs sometimes become unable to bear their weight.  The feeding of corn to beef cattle during the final stage before slaughter is a carefully managed balance between initial weight gain on this highly unsuitable diet, and weight loss once the acidity of the rumen caused by the corn begins to dissolve the rumen lining.  Concentrated Animal Feeding Operations, or CAFOs, are notorious for the conditions in which individual pigs and other animals are kept, not to mention the significant issues of air and water pollution from the staggering amount of waste you get when you keep tens of thousands of animals in a very small space.

What do we owe the livestock we rely on for meat, milk, and eggs?

The backyard food movement is certainly driven at least in part by peoples' desire to take more control over how their food is produced.  This is a good thing in a culture that has become increasingly alienated from the life forces that sustain our own, even if the motivation is only rarely the welfare of the soil, plants, and animals.  In an increasingly crowded world, however, not everyone will have the luxury of space, good soil, and clean water plentiful enough to raise food of any sort.  We're still going to need large, efficient farms at some scale.

All the same, awareness will at least keep us honest in our obligations to the animals that feed us, to keep them fed, sheltered, and provide them with the opportunity to express the most basic essence of what they are: living beings.  At what price to our own humanity do we want cheap bacon?

Five hens still scratch and peck underneath the new coop, ignoring the sheep who come by every evening to take a look at them.  They may yet complete the transition into a hardy little productive flock for us; we'll give them more time to settle in to their new world.  Whether they provide us with eggs or meat, we'll be grateful for the gifts of their lives, sustaining ours. 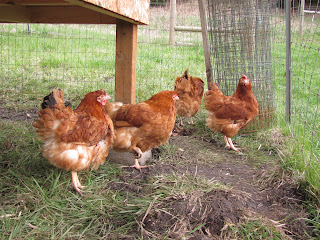 Posted by Jennifer Gervais at 12:22 PM