There has been a traditional divide between the worlds of water and dry land in ecology and management, one that has greatly impeded our understanding of the linkages between the two, and long prevented us from realizing, once again, that the artificial divisions we place upon our perception of the world in an attempt to make it easier for us to understand or manage are just that- artificial.  I realized this more fully when I first began to work with the land we owned along the creek north of town.  At first it seemed straightforward enough.  There was creek, and there was upland, and there was only a narrow ragged remnant of forest running along the banks.

It is a fairly short creek, only a few miles from headwaters to its confluence with a small river.  The source is on the major ridge to the north of us.  From there, the creek cuts quickly downslope until it reaches the valley floor not far upstream from us.  The creek slows down a bit there, taking the time to begin to meander, and it supports a nice riparian woodland of bigleaf maple, pacific ninebark and Indian plum, and wildflowers such as delphinium and trillium.  By this point, the creek is big enough to throw a good temper tantrum during a winter storm, and of maintaining a base flow during the summer drought.  Both are important not only to the life of the creek, but to the life of the forest as well. 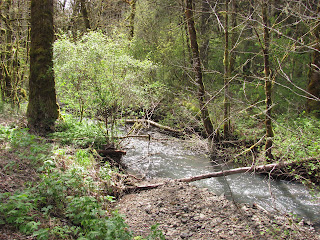 The water doesn't just come from the channel coming down from the north.  There are numerous seeps along this section of the valley, places where suddenly sedges bristle up, where you can sink a tractor up to its axle before you can blink (we've done that).  Fencepost holes sometimes filled with groundwater within minutes, making us rethink the placement of fence lines.  This water is coming from the ridges that run to the west and east, traveling below the surface for perhaps a kilometer or more before bubbling back up into daylight. Some of it likely comes up right in the creek bed.  This is known as hyporheic flow.  It means there's more to the creek than the channel, and that wearing mud boots is generally a good idea even in the meadow.

I've been slowly bridging the divide in my formal education, reading more about just how much a mix of upland and aquatic worlds a riparian zone really is. Large woody debris slows the flow of water, allows sediments to settle, and provides pools.  There isn’t any large wood in our section of creek, because there haven’t been large trees to provide it for many years, and it probably was dragged out if it had fallen in.  There isn’t much of a floodplain here anymore either, because the creek has cut a channel too deep to climb out of in all but the worst floods.  The end result is a truncated system, created from historical misuse.  The floods this past January, however, began to pile up debris and created side channels, the first signs of returning complexity in our section of creek.  Maybe we're getting somewhere, reestablishing the connections between aquatic and terrestrial, past and present. 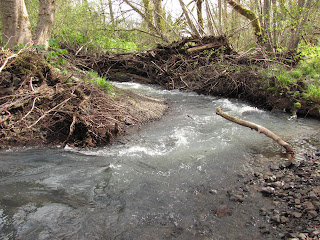 Creek bed after the floods rearranged it.  Photo: J. A. Gervais

This patch of land has been farmed for decades.  The last people who lived here rescued abused horses, and fenced in a broad wedge that included the creek.  The horses, over a dozen of them, trampled the banks and stripped the trees, until only a thin, wavering line of vegetation remained.  When the horses left, invasive blackberry thickets grew to over ten feet in height, choking out any hope for new native trees and shrubs.  But this creek has been designated a possible salmon stream, and landowners along the length of it have been encouraged to restore the riparian forest that once graced the length of its banks.

The forests along waterways support the life in the water, which in turns provides resources to the life on land.  Hatches of aquatic insects such as mayflies don’t just feed the fish, but they also support the birds and bats and spiders living along the banks.  In turn, terrestrial insects and plant matter falling into streams and rivers provide major sources of nutrients and energy to the aquatic community.  In fact, one study suggested that nearly half of the annual diet of rainbow trout was made of insects that fell into the stream.  The terrestrial insects are strongly affected by the vegetation along the waterway.  If we wanted to see salmon return, we needed to plant trees.  I had just plunged across the terrestrial/aquatic divide. 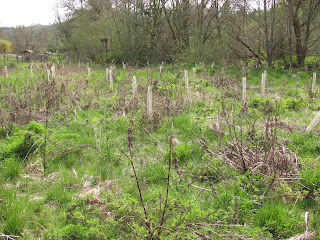 We mowed down the blackberry and with a good number of friends, planted over a thousand native trees and shrubs into the two acres along our section of creek.  Things are looking up.  The planted trees and shrubs have done pretty well, especially the willow.  Even more encouraging, a number of tough volunteers have sprung up from the areas once smothered by blackberry.  We’ve found banana slugs and rough-skinned newts on our property.  We’ve heard frogs in the seeps along its banks and seen fish and invertebrates in the water.  We’re not back to the conditions that existed a hundred and fifty years ago, but they're probably better now than in any point during the past three quarters of a century.  We hope the trend continues beyond our ownership.

Although you can’t stand in the same river twice, the continuum of history and geography shapes the water flowing around your legs.  There is still old farm junk caught in the creek bed, sheets of sediment twisting and crumpling against the bits of rooted rusting iron.  The fence line is new, barely five years built.  When we put the fence in, it was set far enough back that there was easy safe distance from the wire to water.  The creek has looped toward the fence since then, maybe wanting to add more metal debris to its collection.  The creek already reclaimed the lower pasture corner during that violent storm last January, jumping out of its bed and sweeping an arm across the grass, depositing silt from the high ridge.  Remember what's happened before, what came and went, where proud accomplishments failed. 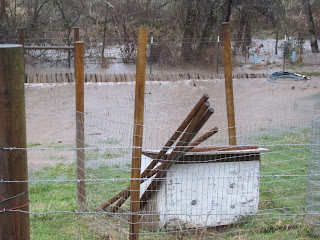 The tenuous boundaries between terrestrial and aquatic systems. Photo: J. A. Gervais

What we do on the banks of a river affects what happens between those banks, but it’s all pretty temporary in the lifespan of moving water.  In the end, erosion will wear down the divides.


Posted by Jennifer Gervais at 4:32 PM