View from the Roof

It was one of the first summer mornings we've had this year, but like too many summer mornings, there were always chores to do.  The solar hot water system has been on the blink for some months now, thanks to an unreliable sensor, and although Dan had finally obtained the necessary parts and even rigged a temporary repair, the fix needed to be made more permanent.

This required another trip up to the highest roof of the house.  The living room juts out from the main wall, so getting to the rooftop panels means hauling a ladder to the top of the living room's first-floor roof, then setting it up to reach the roof over the second story, the uppermost roof of the house.  Good sense seemed to require a spotter at the base of the ladder, so repairing the sensor became an all-hands-on-roof affair.  The dogs offered moral support from the grass below.

The second-floor windows on the south side of the house are set just above this first-floor roof.  The view from my desk is essentially the same as the one I obtained by sitting on the roof with my back against the exterior wall, waiting until I was needed.  However, there wasn't much else I could do but sit and watch a summer morning unfolding on our small corner of the world.  This is something I confess I absolutely do not spend enough time doing.  There may be days, very bad days, when I hardly look out the home office window at all.  Instead, my existence is shaped by the computer, by proposal deadlines or the text of a report, the dead words on the electrified screen blocking out the living world outside. 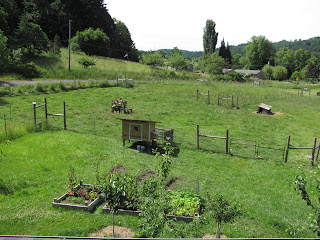 This morning, there was no window, only open air filled with the ruckus of two house wren families, both with newly fledged young, bouncing from fencepost to wire and back, squabbling and begging without any sense of propriety.  Young chickadees were working the riparian edge, noticeably less careful than their parents about popping out of the foliage into plain sight for long stretches at a time.  The swallows flashed like feathered sabers, slicing up the sky in search of prey to bring their still box-bound baby.  Far less graceful, our four big red hens and the little flock of young hens rambled about the pasture, the unruffled dignity of the older hens a striking contrast to the gawky, awkward cliquishness of the young girls, who are still quite unsure of themselves.

The goats had already had a good graze and had retired to their platform play structure to chew their cud and dangle their feet in the morning breeze.  The old ram eventually came to join them.  A massive beast, he's pretty gentle, and has been seen putting up with the indignity of having lambs and even the goats climb up on his back as if he were nothing more than an old stump.  When he's had enough, he heaves to his feet, standing in an Eeyore posture of gloomy stubbornness until his tormentors find something else to do. This morning, he seeks out the small patch of shade under the goat platform, or maybe he's just seeking their company.  It's a nice morning to share. 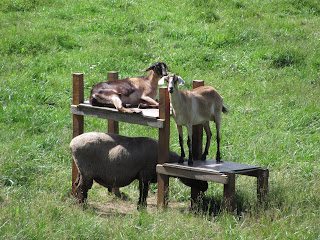 The reverie broke when a small roll of electrical tape came wheeling out over the edge of the gutter and launched into the atmosphere, arcing out over the grass below.  Would you mind getting that, a disembodied voice cried.  In through the window, down the stairs, pause to plug in the coffee pot, search the long grass until the errant tape is located, another pause to pour the coffee and grab a book I've been wanting to read, back up the stairs and through the window.  The tape delivered, I spend another forty minutes reading, enjoying my coffee, the sounds of the creek and the birds, and wishing that all house chores were similarly demanding.

More than that, I wish I were better at simply stopping, remembering to stand in awe of a green and feathered early summer morning, one among billions, but one of the few in which I am alive and privileged enough to witness.  The book I read on the roof offered up a prescient quote by Marvin Bell:


"Of all animals, only Man has to remind himself that he possesses life."

Posted by Jennifer Gervais at 4:54 PM