The Ecology of Fear

Wolves are back in the far west.  They are not exactly universally welcomed, showing a sharp divide between ecological science and a human-centric world view.  During a recent academic interview, the candidate from the intermountain region lost his cool at the very end of the required seminar presentation, when he suddenly announced in a heated voice that wolves were a very serious issue, and those of us who had not yet experienced the real wolf on our doorstep had no idea how dangerous these animals were.  "You wait, it will be a bigger issue than salmon!" 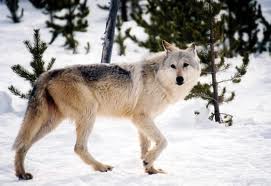 In the Pacific Northwest, that seems at first hard to believe.  Salmon, after all, have spawned savage political water wars at a national level and extreme controversy over removal of dams on the Columbia and Snake Rivers.  Salmon long shaped the biological, cultural, and economic landscapes of this region.  They fertilized the coastal forests that surround the spawning streams, supported a rich variety of indigenous cultures, and bore a major fishing industry.  Now many of the salmon runs along this coastline are headed to extinction.  They are leaving only echoes of their legacy in a world made poorer by their absence in a myriad of ways.  Their absence is revealing the size of the role they once played.  Wolves have some pretty big fins to fill.  They may well be up to the part.

We've learned a lot about the role of wolves in ecosystems since they reappeared along the continental spine.  Wolves have been credited with bringing back the riparian forests in Yellowstone, no less, and increasing the pronghorn herd.  We've also learned that they're every bit as controversial as they've ever been.  It is very easy to find someone with strong feelings about wolves.  They just don't happen to all agree with each other.

That is the understatement of the century.

Wolves in Yellowstone have revealed not only just how complex ecosystem linkages are, but how we have ignored the importance of the behavior of individual animals in understanding system function.  There are more aspen in Yellowstone because there are wolves.  True, more wolves has meant less elk, because wolves like to have elk for dinner.  An even bigger factor, though, is the fact that the elk are very much aware that wolves like to eat them.  And they are afraid.

Wolves hunting an elk in Yellowstone.  Photo by Doug Smith.

The ecology of fear has undergone a recent renaissance in ecology.  The basic idea is that prey animals will behave in a manner to balance the risk of being eaten with the need to eat themselves, and they will moderate their behavior according to how they perceive that risk.  With the wolves gone, elk and moose in Yellowstone were free to go anywhere they wanted, and feed there uninterrupted.  Their populations grew, and hordes of hungry, careless elk browsed the riparian areas in Yellowstone into stubble.  Along the way, beaver, birds, and amphibians all suffered the consequences, and the very hydrology of these streams was altered.  The elk had simply gotten out of hand.

Enter wolves stage right, some fifty years after their extirpation.  So many years had passed without wolves in Yellowstone that when the wolves returned, the moose did not even recognize them as a threat.  The word got around quickly, however, and the elk found that the rough, low-visibility terrain of the riparian systems was too risky a neighborhood for loitering, even without many shrubs or trees.  Exit elk, stage left.  They are still around, never fear, along with much wiser moose.  Enter beaver and rare wetland plants and small birds.  Wolves also suppress the smaller predators, who wreak havoc on prey that wolves would ordinary not bother with.  Pronghorn fawns suffered fewer losses to the jaws of coyotes after the wolves returned.  Enter more fawns and small mammals.

So, wolves are busy, letting trees grow, birds sing, and pronghorn fawns romp across the landscape.  There may indeed be fewer elk out there, but there are still elk, and there are a lot more of other native species, which is a good thing all around.  At least it is from an ecological point of view. 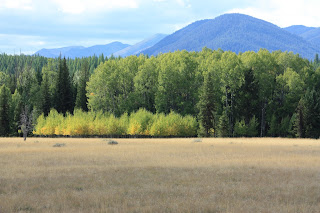 North fork of the Flathead River near Glacier National Park.  Note the lack of medium-sized aspen and the distinct browse line.  Wolves have begun returning to this area.  Photo courtesy of Randy and Pam Comeleo.

The wolf howl is heard, out of the darkest reaches of backstage.  For a century and some, we've been able to pretend that the entire western landscape was ours to do with whatever we wanted, facing no worse threats than occasional severe weather or accident.  Mountain lions reasserted themselves as something to pay attention to in some areas, but they have not proven to be the stuff of nightmares.  Our livestock grazed at will throughout this vast region, and we collectively gave little thought to the welfare or existence of any native species.  Until the wolf howled beyond the borders of our national parks.

Enter the fear of the wolf, center stage.  The ecology of fear is proving itself a potent force to reshape landscapes once again, as ranchers declare that wolves will be the utter undoing of an entire industry and a traditional way of life.  It really isn't about the losses of a few dozen cattle each year.  The carnage will not be absolute, or unchecked.  That may not be said of the rage arising from the challenge to the perceived human hegemony.  Will we choose to de-wolf the west once again, or will we learn to live within complex landscapes shaped by the interactions of many species, even the ones we fear? Will we learn to live among a web of competing visions and values shaped by our own species? 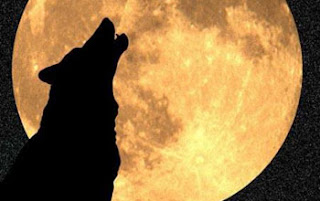 We've viewed the place as utterly our own for a long time in our own minds, although not even two centuries have passed since we've begun the great ecological unraveling of the west.  The howl we need to attend to is the one coming from ourselves.  Do we really think that we are the supreme masters of our environment, subject to no limits, beholden to no ecological laws?  Even among ourselves, whose vision should direct the action?

The real wolf here isn't the large, predatory canid.  It is our own outsized, arrogant, egotistical view that only our needs matter.  Even if our needs were the only ones that did matter, we can't get along without all the rest of the biosphere.  Let's hope we're wise enough to speak to the real issue, not the shadow-play of an outdated view of our own place on the stage.

Posted by Jennifer Gervais at 8:11 PM