The male evening grossbeak may be one of the most brightly colored birds we overlook right in plain sight.  At least, I always think this in the last week of April and the first two weeks in May, when flocks composed of hundreds of individuals suddenly descend on the center of Oregon State University's campus and spill over into the tall trees in the historic downtown area.  To be fair, the evening grossbeaks stay high in the trees, and their green, black, and yellow plumage, which seems so bright, blends in astonishingly well with the new leaves against a startling sunny sky.  It is as if suddenly someone turned on the color after a long monochrome winter, and all that green and yellow is too overwhelming to pick apart into individual components. Evening grossbeaks aren't wallflowers.  They are big, they are loud, and they are mobile.  But they do like the upper parts of the canopies of the tallest trees, making them somewhat difficult to see.  Binoculars help.  Watching the flocks of grossbeaks inevitably invites watching the crowds of people thronging the campus between classes, to see who else is paying attention, and if anyone else is craning their neck to see the treetop show.

It's hard to tell who actually notices the loud clear calls and buzzy whistles and the rain of empty seed pods wafting down from the heights, but isn't actually trying to look.  There are schedules, after all.  The grossbeaks keep them too, arriving on campus typically in mid-morning, having flown in from the hills northwest of town.  In the late afternoon, they filter back up into those hills, apparently refusing to spend the night in town.  I hear their morning commute while walking the dogs before I commute to town myself.  They fly over in tight flocks, urging each other on with hurry-up calls.  I have no idea if anyone is taking attendance.

I've asked people on campus if they'd like to borrow my binoculars on occasion, if they don't have their eyes fixed to the pavement while moving at warp speed, and if their ears are clear of electronic devices.  Most people have been shyly curious, and delighted when they finally get a glimpse of the handsome males.  These birds look like they belong on the tropics, not on campus with the drab sparrows and juncos that students might ordinarily glimpse on the way to class.  Suddenly there are brighter possibilities afoot, the campus a lot more interesting-  People start to notice the trees and the birds again, if only for a little while.  I take this as a hopeful sign. 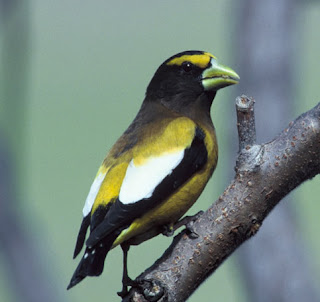 Grossbeaks are nomadic, known for their wanderings far out of their typical haunts if good seed years are followed by very bad ones, so that there are too many hungry grossbeaks and a mass exodus ensues.  The flocks around campus come every year with adamant regularity, however, and spend these few weeks frantically eating and courting.  When the speed dating session is over, they disperse; presumably, they're heading into the Coast Range and the Cascade Range to get down to the business of breeding.

How they all know to come through Corvallis, Oregon at this time of year to feed on the seeds of the elms around campus and around town is an open question.  Presumably the juveniles learn by following the older birds, and now there's some kind of tradition- "Let's meet on campus!" followed by, "See you next year!"
Just as suddenly as they arrived, the grossbeaks leave, the banquet over. I'll still hear solitary, plaintive raspy contact calls in the woods above our farm for a few more weeks, before those too go silent for another year.  Probably the local little brown birds breathe a big sigh of relief to be rid of the big noisy showboats from out of town. 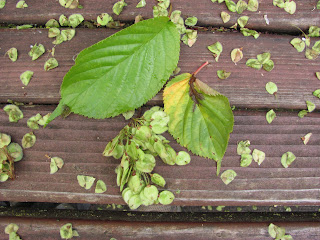 I hope the little brown birds continue to be so overwhelmed every spring, as many parts of the country are seeing declines in these gorgeous finches.  It isn't entirely clear what's going on, because evening grossbeaks get around and don't mind showing up in new places where they may be entirely unexpected.  Their stubborn predictability here is a treat.
Posted by Jennifer Gervais at 6:27 PM