Groundhog Day on a Bicycle

I've been pretty committed to reducing my carbon footprint for a few years now, spurred by the scientific evidence that suggests that global warming is bringing about severe changes to the planet's climate even faster than we had expected.  I'm not someone who still needs convincing. But I still find that the gap between intention and action can be persistent and pervasive, requiring a large reserve of daily resolve to bridge.

I ride my bicycle to town to my office, and for many of my errands.  I have decided not to be dogmatic about it, allowing trips at night and trips to pick up heavy bags of dog food, livestock feed, or kitty litter to be made in the car. But I continually challenge myself to leave the car in the driveway, and take the bike instead. 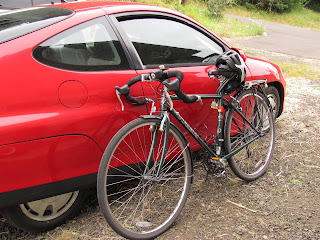 I've made it easy on myself by riding a good bicycle, a touring bike outfitted for commuting with fenders, lights, and reflectors.  I've got good bike bags, and a nice rain jacket.  My commute is really a lovely short tour for much of the way if I choose a longer route, and bike lanes or bike paths exist on all but the first three-quarters of a mile of my journey.  The shortest distance to my office is just over five miles, and my office has great secure, dry bicycle parking and a place to hang wet clothing.  In sum, I've got the optimal situation for bicycle commuting.

Still, I find the walk from the front door to the bike shed past the car to be one of the most challenging twenty-five yards I've ever traveled.  The battle goes like this: I'm already behind schedule. It's raining. It's hot. It's cold. I'm really tired today.  I might be coming down with something. If I drove, I could do this errand that is not feasible by bicycle.  Everybody else drives.  Maybe I'm just a freak for caring so much.  Why don't I give myself a break today, and  I'm sure I can come up with a reason why I deserve one.  Meanwhile I'm trudging to the shed, pumping up the tires, and resolutely rolling my bike up the driveway.  Fortunately, I live at the top of a hill, because that easy launch helps overcome the last resistance, and off I go. 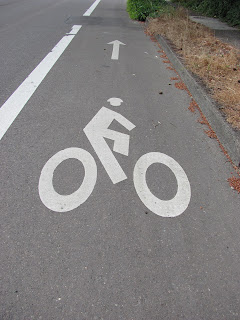 I've been surprised at the continual inner battle, despite what I know about the science, the consequences of continuing to carelessly emit carbon into the atmosphere, and the fact that I really do enjoy riding my bicycle.  It helps me realize how much greater the challenge must seem to someone who doesn't have such an ideal commuting situation, or whose job is less amenable to arriving at the office wet or sweaty, and needing to change, can't safely ride at all, or who perhaps doesn't see global warming as an immediate threat.

The daily inner battle has also taught me that I need lots of different arguments to help me push the bike out of the shed.  Sometimes, but not often, pure guilt is a motivator.  It typically doesn't work two days in a row. Who wants to feel guilty?  Of all emotions, I think we're best at managing to avoid this one.  I consider it a tool of last resort.

Sometimes I can get myself going by reminding myself of how much I usually enjoy the ride in to town.  This is true, but  the trouble is that I remember plenty of rides I didn't enjoy, when either bad weather, a negative interaction with a motorist, or too many dead deer carcasses on the side of the road ruined the fun.  Still, on the ride to town and back I have enjoyed some spectacular sunrises, encounters with friends, surprise wildlife sightings, and even fresh blackberries in season.  I almost always feel better after exercising.  This motivator works more often than any other. 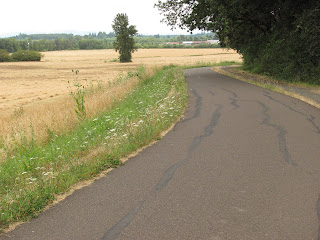 I've also found I'm pretty reward motivated, and I'm not above personal bribery.  I keep a package of homemade chocolate biscotti in the freezer at work.  All right, I tell myself, biking burns calories.  Ride in today, carrying all of your gear and with full intention of stopping at the store to buy groceries on the ride home, and you can have TWO cookies on your coffee break.  On a bad day I might need three cookies.  I can always promise myself I'll pedal harder to make up for it.

The final motivator is highly personal, and I don't use this one if I'm already in a difficult mood.  I can remind myself of the latest rash of scientific papers filling in the lines of what we're in for as our atmosphere changes.  The danger here is this can make me angry, and too resentful of other people who don't seem to be spending their free time perusing the latest issue of Nature Climate Change or following Skeptical Science, RealClimate, or Climate Progress, but who might be driving their dog to the forest as I bicycle past them.  This is generally counter-productive.  First, resentment gets you nowhere.  Second, being angry at cars while you're riding a bicycle is very dangerous.

Instead, I have to apply all of this knowledge to view global warming as a direct threat to something I care very deeply about, something I don't want to lose or see destroyed.  I think of the glaciers I've seen that my nieces and nephews never will, or the high mountain forests now under threat from bark beetles and fire.  I think of my nieces' and nephews' future, which won't have the glorious biodiversity and take-it-for-granted planetary life support systems I enjoyed when I was their age.  Most often, I think of a small dune of sand that arcs up just above the waves in the far northwestern Hawaiian Islands. 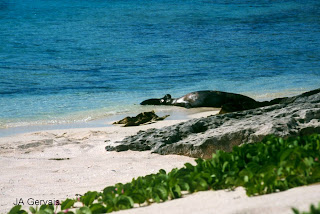 
It hurts to think of all that is going to be lost, parrotfish and monk seals, tropic birds and albatrosses and sea turtles.  I can at least act to prevent more damage, however mundane and humble and small that action might be.  This will get me on my bicycle even in very cold wind and rain.  However, it is also quite dangerous to ride a bicycle if you are upset.  I try the cookie motivator first.

The little daily battle in the war on global warming has me thinking that although the action is happening in the atmosphere, the front lines are drawn by our smallest actions, held firm by whatever resolve we can muster. There won't be a conclusive confrontation, some  great climax that once and for all ends the war.  It's going to be a lot more like the movie "Groundhog Day" than D-Day. 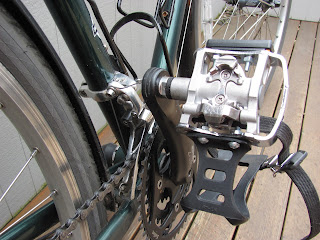 I'll continue to engage in the fight with the daily trudge up the driveway, one small act of defiance over and over against too much loss to bear.

Combine sugar-butter-egg mix with the flour mix.  Divide the batter and pat each half into a log, roughly 2 inches wide, 1 inch high and 12 inches long.  Bake on greased cookie sheet for 35 minutes at 350 degrees F.  Let cool on wire rack completely.  Cut into 3/4" slices and put back in the oven for another 10 minutes.

Make cookies while baking some other item to get the most from the electricity needed.

Posted by Jennifer Gervais at 6:08 PM