Billie appeared at my doorstep in the heat of the afternoon, her hands cupped firmly together and held against her body.  "I've got a boa," she said.  "It came out of a weedy area I was mowing, and I don't want it to get into the road.  Can we release it in your rock wall?"

By all means.  The elusive rubber boa, Charina bottae, is one of those common and utterly overlooked creatures that echos greater things.  It is the small and nearly invisible cousin of the impressive anacondas, pythons, and boa constrictors, massive snakes large enough to eat small deer and peccaries.  The boa family line has some unusual characteristics among snakes.  The members carry two lungs, rather than the single lung considered adequate by most snake species, and boas retain their eggs in their bodies, giving birth to fully-formed young rather than laying the eggs like many other snakes do.  For the uninitiated, boas hunt by lunging out at unwary animals, encircling their prey in coils of their thick, smooth bodies, and strangling their dinner. 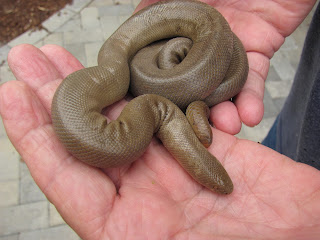 But the boa family is probably most noteworthy for another reason: they are snakes with legs.  They still retain the tiny nubs of what were once fully functional limbs.  Both sexes carry small spurs placed along their sides above the vent, used primarily by the males in courtship.

The northernmost branch of the family ranges into North America in the form of two species, the rosy boa and the rubber boa, which extends up into British Columbia.  These are the poor cousins of the spectacularly patterned and impressively sized South American relatives.  The rosy boa boasts some handsome stripes but its northern cousin, the rubber boa, is notable for its plainness and the fact they occur in a wide variety of habitats although they are rarely noticed.  The body is olive or brown or pinkish, the belly lighter and possibly more shaded with yellow, and there are no lovely patterns of brown or black or green, no rings or stripes or spots or really anything of interest at all.  Their scales are small and very smooth and hardly offer any texture to break the monotony of their skin.  All in all, they are spectacularly uninteresting, other than the chance to see those relict legs that are now reduced to small spurs.

Except for two things: rubber boas have tiny eyes.  And they have thick, knobby tails that are as large as their heads.  With the very fine scales and tiny eyes, you might mistake one for a large fat worm.  The legs are pretty surprising, but they're easy to overlook. 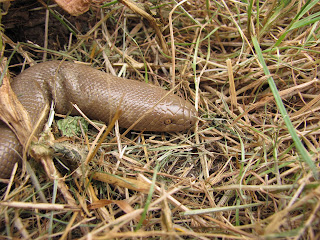 Rubber boas spend much of their time underground, haunting rodent burrows and cracks in the earth, sheltering under appropriate human junk.  They seem to do much of their hunting at night, and they are the scourge of the cozy nests of mice, shrews, and other small mammals.  The snake will eat all of the babies if it can, holding the mother at bay with that thick, knobbed tail.  One report also documents a snake consuming both a mother ensatina salamander and her clutch of eggs, which the salamanders brood until hatching.  These snakes are the real cradle-robbing monsters of nightmares.

However, the boas themselves are often heavily scarred, and some voles and mice will counter-attack repeatedly to defend their offspring.  They may even kill the attacking snake if the snake is a small one.  Bigger boas will also eat birds if they can catch them, and smaller snakes feed on the eggs of other reptiles.  There are reports of big boas trying to eat smaller ones, although these incidents were seen in captivity.  There's a lot of tabloid-style drama going on out in the fields that we never notice.

Billie put out her hands and slowly opened them so I could see the boa.  It was olive in color, with a yellowy underside, about two feet long, and much more interested in hiding its head and presenting its tail to us than escaping.  The rubber boa is also one of the most docile of snakes, moving slowly and nearly impossible to provoke into biting.  They are far more likely to release musk from their vent to deter rough handling, and need to be harassed to do even that. 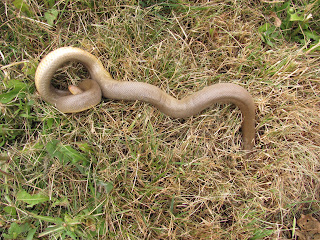 Down a mouse hole. Photo: J. A. Gervais

Rubber boas in the northwest breed in early spring.  The spurs are part of the courtship ritual, used primarily by the male snakes, whose spurs are more mobile.  Females' spurs are also more conical in shape, where the male snakes have spurs shaped like hooks.  Adult females are larger than males, with shorter tails, and more tail scarring, possibly because the demands of producing young require more hunting.  Females may not eat the entire summer that they are carrying their young.  Instead they seem to spend as much time as they can keeping their body temperature as high as possible to speed the babies' development and birth.  They will be born in August, not long before temperatures drop and all of the snakes must find sites to spend the winter.

Rubber boas are homebodies, frequently caught over and over in the same small area year after year.  They are also impressively long-lived, perhaps reaching a half-century even in the wild.  Their habit of rarely showing themselves in the open keeps them safely off the roads that take the lives of so many garter and gopher snakes, and helps ensure their reputation as the boa you never knew about living right in your backyard.

We looked the snake over closely but missed seeing the spurs, which I didn't know about at the time.  The snake might well have been a female, whose spurs are hardly larger than her scales and may not even be visible.  We released it in the grass not far from the half-buried line of concrete rubble that runs along the edge of our yard, the remains of an old barn foundation we had recycled into snake habitat.  There are too many mouse droppings in the bike shed.  I hope this snake sticks around.

Posted by Jennifer Gervais at 10:39 AM