The suggestion came at the end of the email detailing things of interest in the area, received just as we were loading the car for the trip.  Almost as an afterthought, our friend had typed, "oh, and the "mare's eggs" Nostoc colonies are in the creek next to a roadside turn out."  She then gave us full directions to find them.

It seemed we were supposed to know what a Nostoc colony was.  Fair enough, we're biologists, we of all people should know these things.  We  didn't have time to do our homework as we were literally on our way out the door.  But we thought that anything as weird as a mare's egg, whatever it was, should be immediately identifiable, at least as the thing we didn't recognize.  We pulled into the indicated turnout and followed the path down to yet another beautiful spring-watered pool, which are abundant in the Klamath Basin region of southern Oregon.

It looked ordinary enough as gorgeous spring-watered pools go.  The vegetation surrounding the pool was typical, and there was an enormous beaver lodge, suggesting that water chemistry certainly wasn't outstandingly odd.  The water looked clear and felt tooth-shatteringly cold, also typical of these springs. 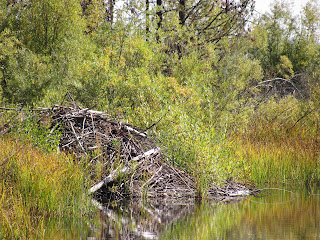 It wasn't long before we noticed the rounded grey-green shapes the size of golf balls to baseballs scattered across the sandy bottom of the spring, and realized that they were not stones.  A few of them were close to the spring's banks, and when we scooped one of the odd things up, we found that it was not a hard object at all, but a gelatinous mass with a hollow center.  We carefully replaced it, feeling as if reaching through the surface of the water had suddenly led to a space-time shift, and we'd somehow left the familiar world we thought we knew.  We had innocently wandered down a woodland path to a perfectly ordinary spring on a lovely early fall day, and found ourselves surrounded by organisms that looked like they more properly belonged to a much earlier epoch in planetary history, if not a science fiction movie. 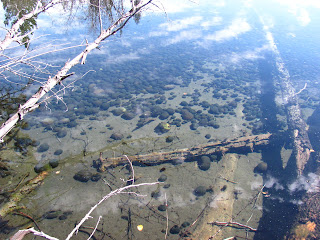 Truth is stranger than science fiction. Nostoc is a genus of cyanobacteria or so-called blue-green algae, although cyanobacteria are neither algae nor blue-green.  Cyanobacteria did start the process of putting oxygen into our atmosphere, however, essentially making a whole new world in the process.  Species within the genus Nostoc live in a wide variety of habitats, from temperate springs to arid environments to the Arctic and Antarctic.  They can lie dormant and undetected for long periods, abruptly gearing up and becoming metabolically active when water becomes available.  They have earned themselves a variety of colorful folk names for this, including witch's jelly and troll jelly, because people couldn't figure out where these gooey blackish-grayish-reddish gobs had come from.  It therefore had to be magical.  This was before the era of science fiction.

Nostoc species are able to fix atmospheric nitrogen, a boon both to the bacteria and the environments in which they live.  These skills make them desirable partners, and they may move in with other organisms, forming symbiotic relationships with lichens, ferns, and mosses.  Species of midges appear to have a symbiotic relationship with one species of Nostoc as well.  The midges lay their eggs on the colonies, which support the larvae until emergence.  The colonies actually change their shape when the larvae move in, which increases the Nostoc's ability to photosynthesize.  This in turn adds more nitrogen to streams that often are nitrogen limited.  Bug makes the shape and metabolism of gooey mass change, which benefits both bug and gooey mass.  Robert Heinlein, did you know about mare's eggs?

Despite the fact that people couldn't figure out where these weird beings were coming from, they ate them anyway.  Or maybe that's exactly why they ate them.  Suffice to say that the Chinese have traditionally enjoyed one species of Nostoc as a special New Year holiday dish, and contributed to desertification of the Gobi as a result.  Peruvians collect Nostoc from the mountain lakes, and eat them or trade them for other food.  Toxicologists are unsure about the benefits of this.  Although Nostoc species have been used in folk medicine for thousands of years, it appears that they contain a highly toxic compound that can melt your liver.

Ironically, the genus was named by none other than the Father of Toxicology himself.  Paracelsus is remembered as a rather difficult character who openly expressed his disdain of the ideas of his peers and colleagues.  Although he emphasized experimentation and direct observation as the pathways to better medicine, he also consulted astrology.  Nostoc might be loosely translated as "star snot." 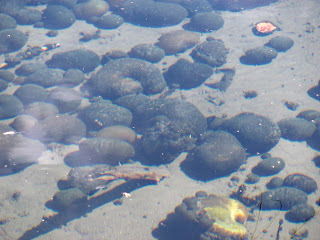 The species we found in the spring was Nostoc pruniforme, which is both endemic and apparently quite rare in the Klamath region.  This species has done one of the the most amazing things of all: it prompted the Bureau of Reclamation to build a temporary dam to prevent water from one of the few known occupied pools from draining away.  The Bureau of Reclamation likes to build dams, usually to provide water and electricity or just because that's what they do.  I have never heard of them building one at the potential expense of agriculture, all to save balls of star snot.  Maybe they'd heard that mare's eggs were magical.

Long may we be amazed by the other beings who share our planetary home!

Posted by Jennifer Gervais at 3:28 PM