The silver trees twist up out of the rock, binding together red earth and blue sky.  The thick fingers reach up as if to catch quick whips of cloud, or grasp at the wings of the ravens.  These trees have clenched the rim of the caldera for many hundreds of years, bearing witness to changing seasons and ultimately, a changing climate.  They are beautiful, and many of them are dead. 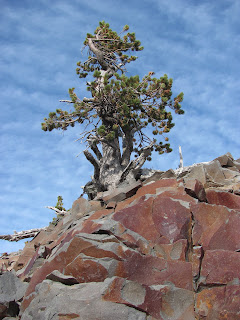 The whitebark pine, Pinus albicaulus to its most serious-minded friends, lives at the highest elevations of Crater Lake National Park in Oregon, and in high elevations throughout western North America.  The species has long contended with atrocious weather, swinging between violent storms and forty or more feet of snow each winter at Crater Lake, and then a prolonged summer drought that breaks with the next year's snowfall.  These trees don't even begin to produce seeds until they are in their sixth decade, and only after their first century do they begin producing cones packed with large nuts in any quantity.  Not surprisingly, they grow slowly and are capable of living a long time, at least in the world they knew.  Unfortunately for them, the ground rules have changed in the game of survival.

One of the wild cards that we're gambling with in warming the global climate is the ranges of species.  As conditions shift, some species find themselves unable to adapt or move quickly enough to escape newly hostile conditions.  However, some species are finding themselves unbound, capable of spreading where they've never been before, and often the conditions or other species that kept them in check do not spread with them.  Epidemiologists are already finding evidence of the spread of disease-carrying mosquitoes in many countries, which are putting new human populations at risk of diseases that not long ago were safely limited by biological boundaries.  But it isn't just people who stand to face new and devastating challenges as organisms break free of traditional limits. 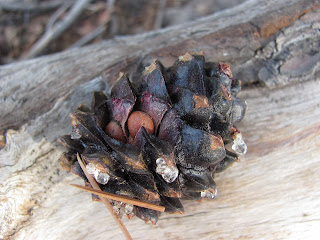 Whitebark pine cone and seeds, which feed many species of birds and mammals. Photo: J. A. Gervais

Whitebark pines are susceptible to a small and unassuming beetle, the mountain pine beetle, known as Dendroctonus ponderosae to entomologists; it is not clear if this beetle has many friends.  The tiny beetles overcome trees by flash mobbing their target, burrowing beneath the bark in great numbers all at once and overwhelming the tree's defenses.  They then let other beetles know that the flash mob has done its work by emitting a chemical signal, called a verbenone, essentially saying the party is over.  Been here, done that.  The flash-mob beetles then lay their eggs beneath the bark of their victim.  When the larvae hatch, their tunneling and voracious appetite for the tree's inmost bark is so great they can kill a large tree in a few weeks by cutting off water and nutrient flow between branch and root.

Beetles have a weakness; they don't like cold weather much, and low temperatures used to hold them at bay from the high country throughout the mountains of western North America.  However, winters aren't what they were, particularly with regard to temperature, and the beetles have surged up slope to attack new targets.  They've discovered whitebark pine, and they like it. 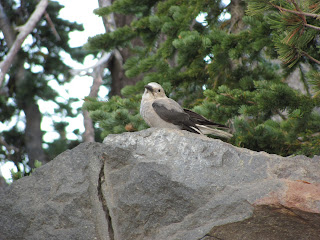 Humans have dealt a doubly bad hand to the whitebark pine.  A century ago, nursery trees from France were shipped to British Columbia.  They carried an undetected stowaway, the fungus Cronartium ribicola, which almost certainly has no friends at all.  The fungus attacks pines, and kills them within a short span of years with a disease called white pine blister rust.  It has finally arrived at Crater Lake.  The fungus kills many trees, and weakens others, making them even less able to withstand the beetles.  Botanists in the park estimate that a quarter of the whitebark pines within the park boundaries are dead, another quarter are dying, and the remaining half face a very uncertain future.

The botanists are doing their very best.  They've been collecting and growing seeds from marked trees and when the seedlings are a few years old, the botanists expose them to the fungus to see which trees have genetic resistance.  They're slowly identifying the very small number of trees who carry the right genes, so that these trees' offspring can be planted and protected to increase this rare type. 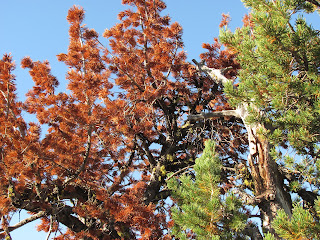 A flash mob of mountain pine beetles claimed the tree on the left.  Photo: J. A. Gervais

Unfortunately, fate holds some of the most important cards.  First, the genetic resistance to fungus means nothing at all to the mountain pine beetle.  Trees resistant to the fungus can still be flash mobbed and killed.  Second, the botanists must beat the wildlife to the resistant trees' cones in the first place, lest the Clark's nutcrackers, grouse, squirrels, and bears make off with them first.  On top of that, there is little money to do the work, as is too often the case. A scant hundred trees have been tested so far for fungal resistance.  Many of these have failed the challenge.  Only a few hundred seedlings have been planted to replace the tens of thousands of dead and dying trees.

The botanists aren't giving up, even if the odds are long and the numbers small.  They're busy continuing to test genotypes of trees, identifying as many as they can that might offer the fungus some fight.  They're protecting these trees from the beetle essentially with a bluff: stapling little bags of verbenone to the trunks of those special trees, to fool the beetles into thinking a flash mob has already invaded.  It seems to work at least some of the time.  Those same trees sport bags of netting around the cones on their branches, which will at least keep the birds at bay.  You have to play your cards the best you can, even when the deck is stacked against you. 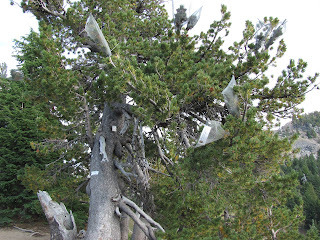 Whitebark pine with packets of mountain pine beetle verbenone stapled to its bark to repel the beetles, and net bags to prevent animals from eating the cones before botanists can collect them. Photo: J. A. Gervais

Whether it will be enough to win this round in the game is another matter; the odds are probably longer than getting dealt a royal flush, but it beats simply folding and losing this elder species without even mourning it, letting the sudden unbending of boundaries wash away so much that is beautiful, unique, and irreplaceable.  May we all be so inspired by the botanists' example that we find whatever ways we can to play our own cards, because in the game to slow global climate change, every move we make to reduce the damage in any way each of us can increases the odds for our own long-term survival.


Note: much of the information in this essay is from "Can we stop the decline of the whitebark pine?" Crater Lake Reflections Visitor Guide, Summer/Fall 2012.
Posted by Jennifer Gervais at 8:56 AM