When European settlers first arrived in this region nearly two centuries ago, they planted fruit trees.  I don't know if this is the first thing they did, but the trees are the last signs of those early settlements.  A trained eye knows where to look for the remnants of an old homestead by identifying the trees the settlers planted.  Hauling young fruit trees  along the Applegate Trail took an act of imagination, a belief that the new life could have some of the same comforts of the familiar, even in a new land very far away.  The reward of that hope comes due every fall, when the woods are full of wild apples.

We went for a walk along the creek above us the other day, spotting feral fruit trees as we went.  There is an old row of apple trees along the road, continuous across current property lines.  Possibly once this whole section was tended by a single landowner.  Near the end of the paved road, the achingly red fruit of a forgotten tree hang like bright holiday ornaments.  Although the tree doesn't look like one of the original settler trees,  it appears to have escaped the notice of the people who own the property.  It isn't visible from their house, but it is separated from the road by a deer fence, discouraging trespass and sampling of those gloriously bright apples.  A pity.  I'm tempted to knock on the door, but we have an abundance of apples ourselves. 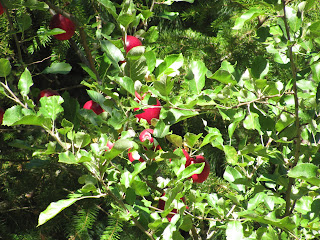 Farther along upstream, signs of an old orchard exist in a number of battered old apple trees, and we also found a pear tree and a stand of plum trees that were first pointed out to me by my dog, who loves the soft golden fruit that falls to the ground.

The old fruit trees kept growing, fighting for sunlight against the swift-growing, light-greedy Douglas firs and the bigleaf maples that quickly overtop them.  They've remained even after the pastures have grown back into forest and the buildings completely rotted away, leaving only faint traces that the small farms ever existed here.  In fact, the strongest signature of former human habitation in these woods is the presence of these fruit trees, now the oldest in this section of forest.  They've woven themselves into the ecology of the place, offering habitat and food and hanging on to the patch of soil they were first given by the people who planted them. 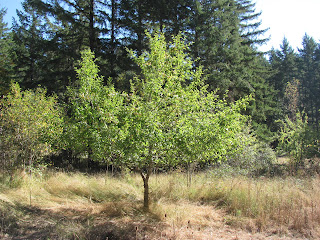 Our land supports a few old trees as well, possibly planted at the same time as the apples up the road.  A young beaver moving through the area girdled one last fall, but somehow the tree survived the horrific damage and even produced a few apples this year.  The other trees are more like thickets because of the root suckers and bent, dragging branches, creating hidden lairs for the bobcat who comes along the creek now and then, visiting in hopes of a chicken dinner.

When we finished building the house, we planted an orchard.  It contains pears, plums, cherries, a peach tree planted as a whim and a wild hope because peaches often do poorly here.  We also planted three apple trees, carefully planning out a long season of fresh fruit with a Williams' Pride, producing apples in August, a Liberty, whose crop comes in late September, and a Gold Rush, whose golden fruits blushed with rose ripen a month after that.  "Mature fruit trees" seems a selling point in real estate, even though most of the time the fruit is never used.  It seems an almost instinctive desire to have some apple trees all the same.  Perhaps it's just another  way of putting down roots in a place, tying ourselves back to the land we live on. 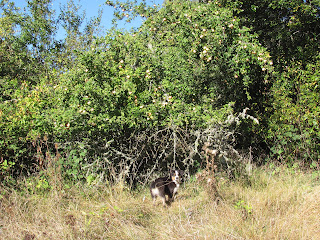 The impact of our activities is so pervasive now it is hard to quantify, in the sense that no spot on our planet is unaffected by our species.  Often we think of this only in the negative, and to some extent, perhaps we should.  But the apple trees bear witness to another kind of influence, where we weave our lives into an evolving landscape, not always harmoniously, but managing nonetheless to create a complex story where our own points of view are present but not dominant.  After all, the Earth is our home, and we are as much creatures of this world as the deer.  In a more enlightened world, let this be the knowledge brought to us in the fruits of the woods and fields.  If this were so, perhaps we'd take better care of them. 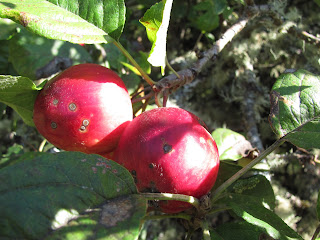 Posted by Jennifer Gervais at 2:34 PM