My friend was double-digging a garden bed next to her house when she dug up the bones of the rabbit.  She had lived in the house for nearly a decade and had never owned such a pet herself, so spirit and skeleton had long since separated.  Someone had loved the rabbit enough to bury its body in the garden.  Maybe it had been a child's first real grief, or possibly a loss less heartrending, but it had been a loss nonetheless.  She dug a deeper hole, and reburied the bones.

Some months later, her old cat died.  She buried him next to the rabbit, spreading fresh flowers over both of their graves.

I didn't mark the grave of my sweet orange cat.  He had lived indoors all his life, and so I buried him in the rough meadow beyond the fence, near a wild rosebush, not far from the creek.  His spirit can do what his body never could, and terrorize the rodents living in the woodpiles, stalk the snakes in the old stone wall, slip unseen through the grasses. 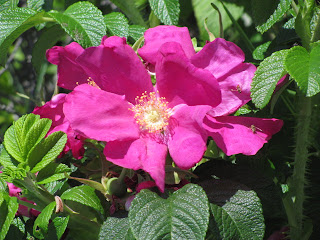 I didn't mark his grave.  Instead sometimes I still call his musical name out the back door after dark, into the rain.  He is nowhere and everywhere in the meadow now, part of the soil, part of the rosebush, part of the worms and the birds and the mice and all of the other beings who together make up that living web I call the meadow.

So it has ever been, and so may it ever be.

Somewhere on the flanks of a hill nearby, the last of the native peoples buried their dead and tended the graves.  The site is no longer public knowledge.  I think about this as I walk the paths that encircle the hill, now forested with thick stands of Douglas fir that are overtopping the oaks.  It's been well over a hundred years since the last burial there.  Likely even the bones are gone now, dissolved and picked up again by the tangled mat of roots that makes up the top layers of the ground.  The original place of burial is now moot.

By this way of thinking, both the forest and the meadow are sacred ground.  By this way of thinking, all ground is sacred, for through the ages every inch of it has received the bodies of the dead and the dying, received back the carbon, the nitrogen, bone and hair and nails and teeth, skin and water and calcium, received it back and mixed it in the guts of earthworms and bacteria, made it ready for root and shoot to offer again the same stuff of life for the next round.  In the soil, past and future generations lie together beneath the blanket of leaves and grass, joined by the arc of those now living in that brief space between. 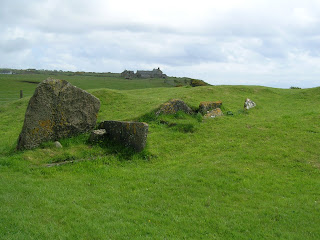 So it has ever been, and so may it ever be.

If we remembered this, if we remembered how we are beholden to the sacred ground, would we be so quick to treat soil like dirt?  Would we bury our dead embalmed in steel boxes lowered into concrete crypts, as if to cheat them of that final journey of renewal?  Would we think that burying toxic waste in the ground is a travesty?  Could we bring ourselves to dig strip mines, pave parking lots, strip land bare and leave it naked under the staring sky?  After all, we wouldn’t think of digging up the bones of our own ancestors, grasping at grave goods with hands of careless greed?  But we have done even this.


Why do we think it is only one day of the year that the spirits of the dead call on the living? Who are the dead?  All Saint’s Day, All Hallow’s Eve, the Day of the Dead.  They have become us, and we will one day become one of them.


Better to take a picnic to share among the stones engraved with the names of those mostly forgotten, remember that they too once knew the warmth of sun on skin, the feel of a kiss, how good it is to be alive on an autumn morning as the leaves go down with one last flash of gold.  Better to spread flowers over the earth, offer compassion for forgotten grief, call the names of those we have loved out over the hills, and tend all as carefully as we would our own grave. 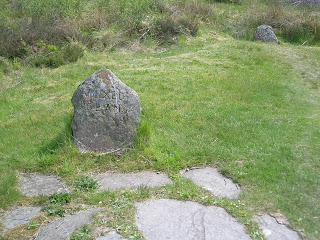 Posted by Jennifer Gervais at 4:28 PM