One year, the cold came quickly, brutally, and without wind.  The ice that formed in the stillness was black ice, so clear it was as if you stepped out on a layer of glass over the water.  Most ice traps tiny air bubbles as it freezes, causing the transparency of water to transform into translucent gray-blue.  This ice was terrifying in both its slickness and in its transparency.  I stood stiff-legged and looked down between my feet at vegetation on the bottom undulating gently in the slight current that wound through the pond.

My dog would not follow me.  She clearly did not like the transparency, and when after much coaxing she put her front paws cautiously on the strange surface, she slipped and fell.  Enough.  If my sixteen-year-old self thought that this strange ice was safe, it was my affair.  She whined and paced from the banks as I slithered carefully around the pond's surface, tracing the underwater pathways of the beaver, studying logs and stumps and drowned debris, the aquatic plants rooted on the mucky bottom.  I skirted the standing snags around which the ice would not be as strong, but otherwise went at will over the translucent surface.  It was a unique and extraordinary look into the inner workings of the pond, and I have never seen such ice since. 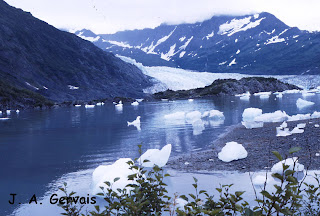 I’ve had other extraordinary encounters with ice.  I lived under the cold stare of a tidewater glacier in Alaska one summer, always on edge for a calving that might send up a shock wave of frigid water rocking up the shallow beach into our camp.  We maneuvered zodiacs among the glacial bergs, ever watchful.  Once I sat admiring the graceful stillness of an ice tower floating silently on the calm water when without warning, the ice rolled over.  The tower became a potentially deadly arm striking the water before submerging.  The newly exposed keel bobbed gently for a moment or two, then all motion ceased and the morning continued as if nothing had ever changed. 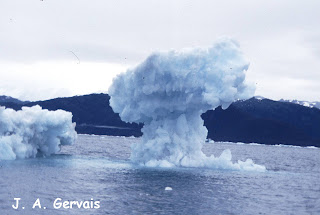 Once we took ice for granted. It still seems cheap and easy, dumped into glasses of water no one intends to drink, casually spilled onto the grass when a cooler is empty of picnic goodies and no longer needed.  Ice on water was also once a given, and the lakes of the Maine of my childhood sprouted small forests of ice-fishing shacks for the winter months.  Frozen ponds and lakes made expedient run-outs from sledding hills, and easy shortcuts on skis if you didn’t mind the wind.

Then the ice began to melt, or never formed at all.  There are now winters when the northern lakes remain as open water.  We’ve already added enough carbon dioxide in the atmosphere to warm the planet’s surface so that the average temperature across the United States in 2012 was over 3 degrees Fahrenheit warmer than the average for the twentieth century. Worldwide, it is enough to melt an average of 142 gigatons of ice from the Greenland ice sheet each year since 1992.  Enough so that there may no longer be Arctic ice in summer by 2050.  Not even one hundred fifty years after the first European reached the North Pole, there may be no ice left there. 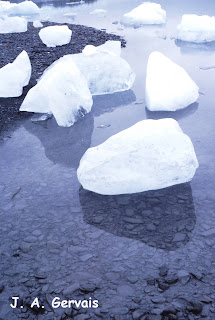 I have dozens of slides of glacial ice.  That summer, we fished it out of the shallows and used it in the field-camp coolers, and once we lugged it up to a wood-fired hot tub to cool the too-hot water.  We sat with the ancient ice bobbing around our chins, melting fast as the rain beat down and steam obscured the glacier across the lagoon.  At the time, the permanence of the thick fist of the glacier punching out of the mountain valley was unquestioned.  We marveled at the surreal colors and shapes and sounds, but not at the change that even then was washing away the permanence of ice, and the cultures and biota that depend on it.

I have dozens of slides.  I was young, and broke, and used cheap film.  The images are discolored and fading, as if they are from a much earlier time, yet not even a quarter century has passed since they were taken.  The scenes these images depict have all but disappeared. The glacier is gone, retreating far up the valley and far from the water’s edge.  There is no more ice in the bay or tidal lagoon, and only the recently ice-scoured rock still bare of vegetation gives any hint of how recently things were very different.

How fast does change have to occur before it breaks the illusion of ice-like stillness?  We stand on a lens of black-ice denial, thinking we’re separate from the processes changing the earth right beneath our feet.  It can be a deadly illusion in a world of melting ice.

Posted by Jennifer Gervais at 3:21 PM