Groundhog Day on a Bicycle II

Early in my career, I worked in Prince William Sound, Alaska in the aftermath of the Exxon Valdez oil spill. The memory of the sight and smell of heavily oiled shorelines and slicks out on the water against the most gorgeous, wild backdrop imaginable kept me away from Exxon filling stations forever after. Given my tendency toward tiny, fuel-efficient cars, Exxon surely never felt the sting. But if by the simple act of avoiding one gas station sign even while I still pumped gasoline I would remember the terrible cost of oil, it was well worth the inconvenience to me.

And I hadn't even heard of global warming or climate change yet.

I've been a pretty dedicated bicycle commuter now for most of my adult life.  Although my dismay over the impacts of fossil fuels has certainly been part of the motivation, I don't believe in hair shirts. I rode my bicycle because I love to ride, I enjoy the exercise, and over the years the views of sunrises, wildlife, and unexpected encounters with friends both new and old along the way were an enormous added bonus. I also hate driving, which I really don't view as a bad thing as long as I am still able to do it safely and well when I must. There are always days when convenience beckoned, and even days that convenience won out, and I drove rather than rode. It still happens. But the trick to sustained change is making doing the right thing the easy alternative, and ensuring that the best parts of the alternative strategy are enhanced over whatever benefits might be obtained by the default you're trying to change.

I ride a Trek 520 touring bicycle outfitted with racks, fenders, lights, and a bell. Over the years I've put together quite a good assortment of high-quality rain gear and warm clothing to fend off western Oregon's winter weather. I've learned to maintain my bike and I keep it in excellent working order at all times, partly for safety, but largely because a smoothly operating bicycle is far more fun to ride than one that is not. It isn't always easy to get the bike out of the shed, but I've managed to  ride over 30,000 miles on my bicycle to and from work and on errands over the decades. It hasn't replaced or even equaled the miles I've driven, but it still has helped push back against rising atmospheric carbon dioxide.

I'm not getting any younger, however, and recently the cumulative wear was getting to me on top of swimming to manage the tendinitis in my forearms and walking to keep my dogs happily exercised. I needed a better solution. This was more frustrating that it should have been, because we've had decades to think of better solutions to transport given our current infrastructure, including smarter development patterns. Mostly, they have been wasted decades. I contemplated buying a small electric car, now that more of them are on the market, but that was so much more steel and mass and energy than I need 95% of the time.

The answer had actually presented itself on a bicycle trip my husband and I took several years ago, when a guy watched us pedal by on our loaded touring bicycles and hopped in his electric-assist trike, and ran us down to show it off. Aha.... 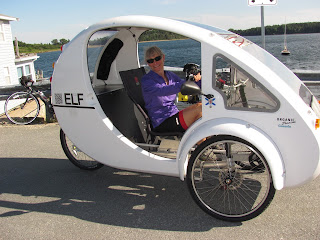 The idea of owning one turned into a reality this January, when a used one popped up in our town. Even used, the ELF ("electric, light, and fun!") by Organic Transit isn't the cheapest solution to non-car travel, but there are other considerations, including accounting for the cost of a ruined planet. This one even had a small passenger seat. We jumped on it.

I had buyer's remorse for about five days. It took that long to get used to the fact that this vehicle is not a bicycle in the traditional sense, although legally it certainly is. I had to learn to integrate pedaling with using the electric motor assist (run by a battery that can either charge from the rooftop solar panel or plug in to a standard wall outlet for a couple of hours). One mechanical disc brake screamed incessantly and I had to learn how to service those, and troubleshoot them. There were various modifications needed to deal with the rain. The shell rattles and the electric motor hums and the roof holds in the racket. On the other hand, I don't get wet, I'm more visible to motorized traffic, and I can spontaneously stop in at the grocery store without strategizing about space and weight.  Even better, I don't arrive at my destination covered in filthy, soaked rain gear and feeling like I just rode 6.5 miles into a stiff headwind as well as driving rain.

My biggest enjoyment, however, has been just riding it around and seeing the reactions. I often catch people circling it and peering into it when I've parked it. People honk and give the thumbs-up. They cheer from bus stops and sidewalks. A young guy smoking a cigarette rode up on his poorly maintained bike and eyeballed the ELF at a stop sign. "It even has a solar panel?? That thing is way cool!" he pronounced, then disappeared into the rain.

We are more hungry for other options than we know.

Posted by Jennifer Gervais at 5:18 PM